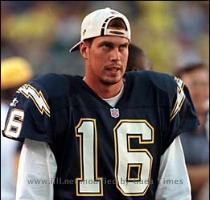 SAN FRANCISCO (GaeaTimes.com)- Former Washington State and NFL quarterback Ryan Leaf plans to write an autobiography soon. This is the latest venture that the controversial ex footballer has planned to take up. What is more interesting to this news is that Ryan Leaf will not be penning his life story in one single book. Instead he has planned to break it up into three parts. There will be three books on his life story.

The footballer whose professional career has been hailed as the most disappointing in the NFL record books intends to tell the world of his tale which he hopes will clear out a lot of misunderstandings. He has been one of NFL’s controversial player turned coach. In April, Ryan Leaf had pleaded to eight drug charges which followed a ten year probation and $20,000 fine. The former Washington State quarterback will be writing his autobiography exclusively on his life, career and addiction towards painkillers. According to reports, the first book of the trilogy will be hitting the book stores in October, 2010. The ex footballer has promised that every incident will unleash of what life is behind the field and glamor. According to him, the story will hold on to the spirit of true sportsmanship.

Ryan Leaf further added that the books will unfold his story right from his fascinating college football days till his career as a coach which ended on a bitter note. The first book will have segments from his life when he made his mind up to play for WSU till his Rose Bowl career. The second one will account of his days as a youth in Montana. The third will deal with the darker side of his life when he got addicted to painkillers while he was a quarterback coach with the West Texas A&M.

Johansson and Ryan Reynolds look 'very much in love'

NEW YORK - It looks like all is not well between Hollywood couple Ryan Reynolds and Scarlett Johanss...

KOLKATA - A city court Friday ordered that the principal and three teachers of the prestigious La Ma...

NEW YORK - It seems Scarlett Johansson can't do without her hubby Ryan Reynolds. The actress was r...

MELBOURNE - Ryan Reynolds has been named Sexiest Man Alive by People magazine. The actor was typica...