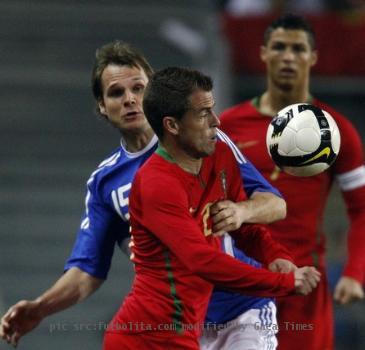 RUSTENBURG, South Africa — Nothing like a win to lift Portugal’s mood.

The team looked sullen and its confidence was rattled after a dreary 0-0 draw with Ivory Coast. But Monday’s 7-0 rout over North Korea has injected some life into a first round that’s been short on goals from the bigger European teams. Gave the Portuguese some momentum, too.

Portugal could finish tied on points with Ivory Coast after the last Group G matches on Friday, but it has a huge goal difference advantage over the African side.

“We needed a result like this,” coach Carlos Queiroz said.

Many of Europe’s big sides have struggled in South Africa, and Portugal looked to be one of them after Ivory Coast had the best of the teams’ opening meeting. But the Portuguese flared to life in Cape Town with a victory that ranks right up their with their memorable quarterfinal comeback against the same opponent at the 1966 World Cup. North Korea led 3-0 back then before the great Eusebio led his side to a 5-3 victory.

The avalanche of six second-half goals was even more satisfying because it came after two years of grumbling back home that a squad featuring 2008 FIFA world player of the year Cristiano Ronaldo had failed to live up to expectations since reaching the semifinals of the 2006 edition.

Portugal’s qualification campaign for South Africa was at times woeful. It included three 0-0 draws, including one at home against 10-man Albania. Ronaldo hadn’t scored for Portugal since a February 2009 against Finland. His last goal in a competitive match was at the 2008 European Championship.

The goal tally against North Korea silenced, for the moment at least, the gripes about Portugal’s difficulty finding the net. And Ronaldo won’t have to hear about that scoring drought any more.

Queiroz can also breathe easier. His tactics against Ivory Coast brought criticism from midfield linchpin Deco, and created some tension among the team. Under pressure to take chances against North Korea, Queiroz’s four changes to the starting lineup paid off.

But the coach moved swiftly quick to keep his players’ feet on the ground.

“All it amounted to was three points,” said Queiroz, who did acknowledge that his players felt “rejuvenated.”

Portugal needs at least a draw against Brazil on Friday to guarantee progress to the round of 16. Portugal has four points compared with one for the Ivory Coast, which meets North Korea in its last group game.

“Nothing’s decided yet,” Sabrosa said. “We’ve got to get ready for Brazil now.”