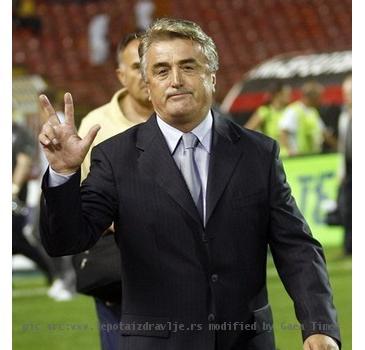 NELSPRUIT, South Africa — Serbia’s first try at qualifying landed it in the World Cup. Now, it can take the next step.

Coach Radomir Antic is confident his players can grasp the opportunity by beating Australia on Wednesday and advancing to the round of 16.

“We know that we have an opportunity of historic value,” Antic says.

Germany and Ghana play in the other Group D match. All four teams still have a chance of advancing.

“I wouldn’t like to put any extra pressure on my boys saying they have to win,” Antic said, “But when I say I believe in them, I mean it quite truthfully.”

Antic’s main headache is the number of players who have picked up yellow cards. Six, including key players Nemanja Vidic, Branislav Ivanovic and Nikola Zigic, will miss the next game if they are carded against Australia.

The situation led Antic to suggest he will rotate his lineup against Australia, but with Serbia far from assured of advancing, he has to be careful not to weaken the team.

The coach gave no hints of his lineup Tuesday, only confirming he already knew which players would start.

“I try to have a balance in my team,” Antic said. “I always want to play with a collective team spirit.”

Australia must win by several goals for a chance of making it out of the group, and Antic said he was aware of the Aussies’ lust for competition.

“Australia has a very good spirit and I’m sure that Australia will be fighting with a great motivation,” he said. “The two games Australia played show they have a very solid team, a very strong team and I don’t expect them to change the way they play.”