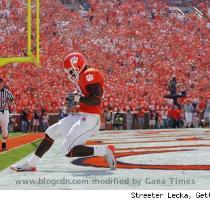 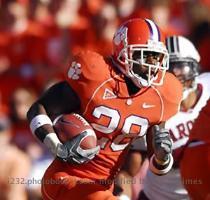 McNabb went 5 for 8 for 58 yards in two series Friday night and hit first-year player Anthony Armstrong for a 4-yard touchdown in the Redskins’ 42-17 win over the mistake-ridden Bills. It was a first-glimpse preseason game that shows Washington’s new coach Mike Shanahan is quite a bit further along than Buffalo’s new coach Chan Gailey.

It’s been a little over four months since the Easter Sunday trade that brought McNabb to the Redskins, and it’s still a jarring sight to see No. 5 in something other than a Philadelphia Eagles uniform. After a couple of wayward throws on his first series, he went 4 for 5 for 47 yards on his second drive and showed he still has some speed in his 33-year-old legs by scrambling to convert a third-and-1.

“When you play your first game, obviously, with a new ballclub, it takes you back to the first game you played,” McNabb said. “Your adrenaline is high, and you have to settle down a little bit. The second time we went out, after our first drive, it led to us putting up some points. Then good things happen. There are a lot of things we have to work on, but I thought offensively we were able to progress.”

McNabb’s favorite target was tight end Chris Cooley, who caught three passes for 33 yards — a surefire harbinger of the regular season, especially with the Redskins still trying to figure out their receiver corps. McNabb’s last throw was the TD to Armstrong, who has made a surprisingly strong case for a roster spot.

Clinton Portis, with more competition than usual at camp, got more than his usual work for a first preseason game, carrying six times for 22 yards. Brandon Banks, an undrafted rookie receiver from Kansas State listed at 5-foot-7, made some look-at-me noise with a dynamic 77-yard punt return down the right sideline for a touchdown in the third quarter.

Haynesworth, who has ended up on the short end of a monthslong showdown with Shanahan, skipped offseason workouts because he wanted a trade. He wasn’t allowed to practice at camp until passing a conditioning test. He aced the test on the 10th day of camp and was told by coaches he’ll have to play with the reserves until he earns a spot back in the starting lineup.

Haynesworth played two series Friday, both with the second unit in the second quarter, and he drew plenty of attention. Buffalo’s offensive line committed two false starts while he was in the game, and he did exactly what a nose tackle is supposed to do — occupy multiple bodies — while rookie Perry Riley blitzed unencumbered and forced Trent Edwards to rush a throw. Haynesworth was the last player to head to the locker room at halftime, walking slowly behind his teammates.

No one could have blamed the Bills for walking slowly off the field. Buffalo had a horrible preseason a year ago — the starting offense scored just three points over 15 series in five games — and Gailey and his players are hoping to use this August to get it right.

They’re not off to a good start.

The Bills scratched 13 players due to injuries, including five linebackers and four offensive linemen. Then they committed three morale-sapping third-down penalties: holding on tight end Jonathan Stupar that killed a drive; roughing the passer on linebacker Aaron Maybin that kept one Redskins’ touchdown drive alive; and illegal contact against Andra Davis that led to another Washington touchdown.

“We have a lot of work to do. A lot of work,” Davis said. “We’re still learning this defense. We’ll learn from this.”

Edwards, in a three-way competition for the starting job, completed 6 of 12 passes for 58 yards and had an interception returned 33 yards by DeAngelo Hall, setting a Redskins score. Another mistake for the lowlight reel: Ellis Lankster muffed a punt for a turnover in the third quarter.

The Redskins scored their most points in a preseason game since 1988.