Rafael Nadal Wins Career GrandSlam at the US Open 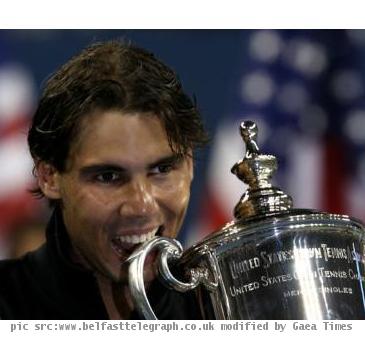 NEW YORK (GaeaTimes.com) — Rafael Nadal’s definitive win at the US Open this year has sealed his career Grand Slam. Novak Djokovic played his heart out to stop this from happening but Rafa was just that good.

The world Number 1 was missing the title from Flushing Meadows in his collection. That void was filled as he won in the exciting match with the result of 6-4 5-7 6-4 6-2. The only gripe with match was the delay due to the rain. This victory makes Rafael Nadal only he seventh player in history to hold the career grand slam title. He said

(Winning the US Open) is more than I dreamt, just to arrive to the final was amazing and to have the trophy in my hands in a few seconds with my heart beating is going to be unbelievable.

Novak Djokovic also acknowledged the fact that Nadal was indeed the best player in the world at the moment. He also mentioned that he absolutely deserved the title. It was due to his resilience that the match was dragged back to 2-2 after Nadal looked to take the game away from him straight away. The two men sure lived up to the billing and provided us with one of the most memorable tennis matches in recent years.