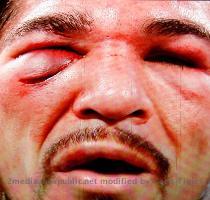 ARLINGTON, (GaeaTimes.com)- Problems does not seem to stop bugging Antonio Margarito. There has been a string of problems for this boxer ever since he lost to Manny Pacquiao. First of all, his defeat to the champion was a good reason to make him low on confidence. Secondly, his alleged consumption of ephedra before the fight had put him ion soup, and now Antonio Margarito’s has a deformed face as the champion broke his eye socket.

Antonio Margarito rushed straight to the hospital after the fight was over yesterday. He was even unable to attend the post fight news conference, on the request of his doctor and his team. The doctors said that he is suffering from a fractured orbital bone and has to undergo a surgery on Tuesday in Texas. Although the fracture in his eye socket was diagnosed in the hospital itself, but those who witnessed the fight could easily conclude that there must have been some serious damage in his face as it was looking quite deformed by the end of the twelfth round. Although it was quite hard for him to continue the fight with the severe pain, he decided not to quit. He said that he is a Mexican, and by no means he could quit without completing the fight. Freddie Roach, the trainer of Manny Pacquiao said that Antonio Margarito showed tremendous valor and strength by not quitting the fight. However, the decision of the judges of not terminating the fight probably ruined his career.

Right now, Antonio Margarito’s face seems quite different from what it actually is. His his knuckles are swollen. Even his side is burnt with the strong punch that he got in the 6th round. He is all black and blue all over his face.

Inside the marriage of Tony Parker's sexting gal pal

WASHINGTON - The marriage of Erin Barry, who allegedly exchanged hundreds of texts with Eva Long...
Copyright© 2010 The Gaea Times