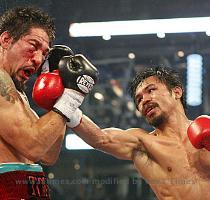 ARLINGTON (GaeaTimes.com)- Antonio Margarito’s loss to Manny Pacquiao was not enough to make it to the headlines. The latest buzz reveals that this boxer was apparently under the effect of Ephedra before entering into the ring. This may be true or simply a rumor to defame the challenger. What ever it may be, it is creating a whole lot of controversies for Antonio Margarito.

It all started when one of the witnesses from Manny Pacquiao’s camp, Billy Keane, entered Antonio Margarito’s locker room before the match. He apparently saw that this boxer was being given coffee that was mixed with Hydroxycut. He also saw a bottle with ephedra-containing substance. He reported the matter to Manny Pacquiao’s trainer Freddie Roach. He said that the boxer was taking coffee that was mixed with substances like hydroxycut, splenda and sugar with a certain amount of ephedra too. He said that some people from Antonio Margarito’s camp said that he had coffee mixed with a pill, which was used with the recommendation of a doctor. However, Billy Keane did not find any kind of pills in the room. Freddie Roach, who was quite disturbed with the whole issue immediately asked the Texas Department of Licensing and Regulation to conduct a pre-fight urinalysis test. The Texas Department of Licensing and Regulation declined his request and said that the test would only be conducted once the match gets over. This decision was not accepted by Freddie Roach as he thought that the substance would leave his body by the time the fight gets over.

Billy Keane is quite sure about what he saw and expects the truth to come out after the post match urinalysis. Antonio Margarito was not available for any comment and one can only wait for the medical results in order to know the truth about whether Antonio Margarito indeed consumed ephedra.

Himachal forest guards to get weapons

SHIMLA - Buoyed by the success of its forest police stations or 'van thanas' in checking illegal fel...

LONDON - Popular slimming supplements sold in pharmacies and health food shops are not likely to fac...

SHIMLA - To develop "green" habits among children, the Himachal Pradesh government has started the p...

Britney 'pops diet pills to get high before performances'

WASHINGTON - Britney Spears reportedly popped diet pills with energy drinks to get high before a per...

Just copy-n-paste the following word list to Comment Blacklist section in Options->Discussion (in Wo...
Copyright© 2010 The Gaea Times