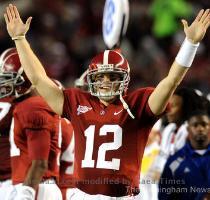 TUSCALOOSA (GaeaTimes.com)- It was not much hard for Alabama Crimson Tides to win over the Georgia State Panthers in yesterday’s match. The home ground was all full of applaud, when the winning team made a sweeping and effortless victory, with a score of 63-7. Alabama Vs Georgia State turned out to be a good match for the fans of Alabama. However, it was equally humiliating for the Georgia State fans.

In the Alabama Vs Georgia State football match, all the four quarters were dominated by the former. The winning team did not allow Georgia State to score any point in the first, third and fourth quarter. In the second quarter brought the team some luck, as it scored only seven points to bring some hope, but soon it was subdued by Alabama. The Tides on the other hand, scored 14 in first quarter, 28 in second quarter, 14 in third quarter and seven in fourth quarter. It is said that it made a very good start which they maintained consistently till the end of the game. The best performance for Alabama was from Greg McElroy, who hit Julio Jones for eight yards and a touchdown. After that, there was no looking back for the team. Receiver Julio Jones finished 86 yards and two touchdowns, for seven catches. Greg McElroy on the other hand finished 2-13 passes for 157 yards and two touchdowns. Mark Ingram and Eddie Lacy also contributed to the victory of Alabama with combined 167 yards and two touchdowns.

The victory of Alabama in the Alabama Vs Georgia State match has thereby enabled the winners to qualify for the SEC match-up with No.2 Auburn on November 26, Friday. Now one has to wait and watch how the tenth ranking Alabama competes with Auburn, that ranks number 2.

LONDON - A new small study has shown that an investigational drug targeting a defective protein that...

Natalee Holloway Mystery May Be Solved

ARUBA (GaeaTimes.com)- It seems that the mystery behind the disappearance and suspected deat...

One in seven US households faced hunger in 2009

WASHINGTON - At least one in seven households in the US faced hunger in 2009, with those getting eme...

Former heavy smokers are at an increased risk of heart failure: Study

WASHINGTON - A study from University of Alabama at Birmingham found that despite 15 years of smo...

NEW YORK - A sex shop in Alabama has come up with a novel way of selling its sex toys - through a dr...