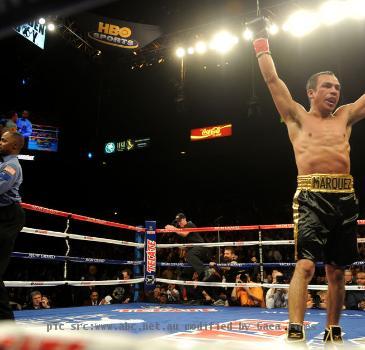 LAS VEGAS (GaeaTimes.com)- Last night was the match of World Boxing Association where Juan Manuel Marquez and Michael Katsidis took part to win the much coveted World Boxing Organization lightweight title. In the Juan Manuel Marquez vs Michael Katsidis bout, the former thrashed the latter on the ring and retained his WBA and WBO lightweight titles. The event took place at MGM Grand Garden Arena where the crowd watched the former defeating the later at 2:14 of the ninth round.

In the Juan Manuel Marquez vs Michael Katsidis fight, the former won the game after referee Kenny Bayless called for a halt and announced it to be a technical knock out. Juan Manuel Marquez said that both of them worked hard for the fight but later in the bout he understood that his shots were making his opponent weak. The present Lightweight World Champion boxer was in the leading position after eight rounds with 78-74, 76-75, 77-74 and then the Australian boxer knocked Juan Manuel Marquez with his left hand. After the match, the world champion expressed his astonishment and said that he was surprised by the left punch as he was not at all prepared for it.

Michael Katsidis was taken to the hospital just after the fight as he was injured. Michael Katsidis said that though he was full prepared in his fight with Juan Manuel Marquez but he admitted that the latter is an experienced fighter. He said that his opponent was stronger than him on the ring and so he could not do much on the ring. However, in the end he said that he is not disappointed at himself as he had to go through a lot to play the game.

A tale of another Fidel Castro!

Buenos Aires, Nov 19 (IANS/EFE) Two Argentine policemen are under arrest and a retired cop is being ...

Smoke from fireworks is hazardous to health

NEW YORK - A warrant has been issued against an offender, who went naked in front of US President Ba...

LAS VEGAS (GaeaTimes.com)- Latin music fans all over the world celebrated the biggest night in L...

LONDON - A fifty-year-old Mexican woman has given birth to a child whose biological father is her ga...
Copyright© 2010 The Gaea Times