BCS Rankings Has Been Declared 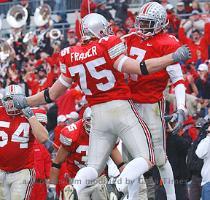 SAN FRANCISCO (GaeaTimes.com)- The BCS Rankings have been determined yesterday in the evening. It brought an end to many speculations and anticipations that were surrounding the football scenario for several days. Although, it was quite predictable for those who have been following the series regularly, its formal declaration legally ended the speculations regarding which teams would clash against whom in the upcoming games, according to their ranking.

The teams that stands first in the BCS Rankings is Auburn Tigers with an average of .9779. This team overtook the Oregon Ducks by not losing a single match in the last few weeks. Oregon missed the first position by just an inch. Their respective average is .9779 and .9777. The third position went to Texas Christian University, who got an average of .9167 after defeating Boise State last week. TCU was followed by Stanford, with .8413. Wisconsin stands at fifth with .8185. Ohio State came sixth in the BSC Rankings, with an average of .7632. Michigan St. ranks seventh with a score of .6980. The teams that would qualify for the BCS Championship Game are Auburn and Oregon as they are the top two teams. The Rose Bowl will be played between Texas Christian University and Wisconsin. Texas could have played for the championship title, is either Auburn or Oregon had lost one match. The Arkansas and the Ohio State will clash at the Sugar Bowl. The two teams that have been qualified for the Fiesta Bowl are Nebraska and Stanford. The Orange Bowl will be played between Virginia Tech and Connecticut.

"This morning, the Reserve Bank released its Second Quarter Review of Monetary Policy ...

For once, Rams, Chiefs, Mizzou all watchableMAPLEWOOD, Mo. — The Post Bar and Grill has 16 beers o...

Wyoming back in Texas to face another Top 10 teamFORT WORTH, Texas — The Wyoming Cowboys are makin...

Coach at No. 5 TCU insists he only needs to find way to win by 1, not pile on points

No. 5 TCU coach doesn't sweat winning marginsFORT WORTH, Texas — TCU was coming off a one-win seas...

Question of the season: Does Boise State deserve a chance to play for national championship?

Put 'em in or keep 'em out? The Boise State debateUnder-appreciated or overrated. Slighted or skatin...

Newspaper: Musburger says pros could use steroidsBrent Musburger, the play-by-play man for some of c...
Copyright© 2010 The Gaea Times