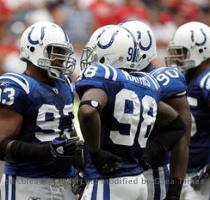 The San Diego Chargers had given a tough fight to the Colts in the NFL match bringing back to them once again a victory. This is the fourth straight win for the San Diego Chargers who have successfully managed to keep with their pace with the AFC West race. This makes them next to the Kansas City, who are ahead of them by just a single match. The San Diego Chargers successfully picked up Indianapolis Colts’ Peyton Manning four times, and then went to return two for scores, making their way for the ultimate victory. According to sources, Mike Tolbert of the San Diego Chargers was seen telling after the match that his team was not desperately eying for a victory. What they were looking for was the good shape of the team, so that they could put up a good performance next week. He further went on to add that the match results were a outcome of his team’s hard efforts and dedication.

The day certainly did not go well for the Indianapolis Colts who encountered a huge marginal defeat in the NFL fight on their home ground in the Lucas Oil Stadium since 1997 when they had lost out the game to the Seattle Seahawks by 31-3. However, the San Diego Chargers fans had a gala weekend ending.

Courtney Love once again posts risque photos of herself online

LONDON - Rock singer Courtney Love has once again posted risque photos of herself on her Twitter pag...

Solitary fish may be first model for human depression

LONDON - Zebrafish that stop swimming when left alone could be the first fish model of a human mood ...

LONDON - Ever marvelled at a taxi-driver's knowledge of a city's short cuts? Well, you can now be ha...

MELBOURNE - A traveller has been arrested for shedding his clothes in a bid to avoid being fris...
Copyright© 2010 The Gaea Times