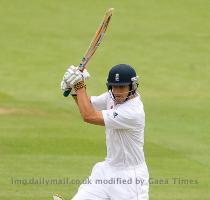 BRISBANE, AUSTRALIA (GaeaTimes.com)- Alistair Cook made history on Australian soil by notching up a double century in a match that looked completely in favor of Australia on Day 3. With a 221 run-lead in the first innings, it looked like Australia were en route to another historical test win in the first test of the Ashes 2010. Alistair Cook and Andrew Strauss, however ensured that England were in the hunt and ruled out almost all possibilities of an English defeat with a 188 run partnership for the first wicket. After reaching his 150 in 302 balls, Alistair Cook increased the pace of his innings and reached 235* in 438 balls.

Smashing 26 boundaries in his knock of 235*, Alistair Cook’s innings was a treat to watch for the cricket fans all over. Also contributing greatly to the great English fightback into the match were Andrew Strauss (110) and Jonathan Trott (135*). England declared their innings at 517/1 and it looked like Australia were in for a tough ordeal on the final day.

Though chances of defeat was ruled out by the efforts of Alistair Cook and rest of the English upper order, Australia has got off to start that guarantees a draw at this point. Stuart Broad removed Simon Katich early on in the inning and it looked like there will be another twist to the dramatic test. Ricky Pointing(47* off 37) and Shane Watson (33*), however, has ensured that there are no further hiccups for Australia in the match. With less than 20 overs left in the match, it looks like the test is heading for an obvious draw.

Rehab Woods out to prove his game in Australia

SYDNEY - Tiger Woods justified his ranking as the world's second-best golfer Thursday with a workman...

ROD STEWART and PENNY LANCASTER could have been expecting twins next year (11) - but doctors believe...
Copyright© 2010 The Gaea Times