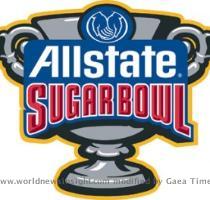 NEW ORLEANS (GaeaTimes.com)- The much awaited annual football event Sugar Bowl 2011 is all set to start in the beginning of the next year. The game has been scheduled to take place on January 4, 2011. It will be aired live on ESPN. However, right now, the main anxiety is regarding who would be the two teams that would play in Sugar Bowl 2011.

The game will be played between SEC #1/BCS At-Large vs. BCS At-Large. For this year, the few probable teams that might qualify for the match are Ohio State, Texas Christian University and the Michigan University. The teams who would be playing in the contest would be clear, when BCS declares the week 14 power raking and the scores of all the team by today evening. It is being expected that Ohio State may be a ‘Sweet Fit’ for the Sugar Bowl 2011. The .7688 to .7148 points gap between the No. 7 Badgers and No. 8 Buckeyes, in the BCS standings will not perish if Buckeyes beat Michigan and the Badgers beat Northwestern. The three way tie breaker with 7-1 score that the three teams Wisconsin, Ohio State and Michigan State are trying to get in the conference, will be resolved by the BSC standing today.

Last year, the Sugar Bowl was played between Cincinnati and Florida, where Florida won over Cincinnati with a score of 51-24. In Sugar Bowl 2011, the same tension seems to be prevailing amongst all the football lovers as the match is approaching the D-Day. Louisiana Superdome will once again witness the 77th Sugar Bowl, with two sensational teams giving their best shot to win the contest.

WASHINGTON - New research has revealed that a sugar found in mouse breast milk promotes the generati...

LONDON - A scientist has 'trained' bacteria to convert all the main sugars in vegetable, fruit and g...

LUCKNOW - Sugar production in Uttar Pradesh is expected to rise to over 60 lakh tonnes this year, a ...

SYDNEY - Researchers has claimed that corporate lunches and dinners at restaurants dishing up rich, ...
Copyright© 2010 The Gaea Times