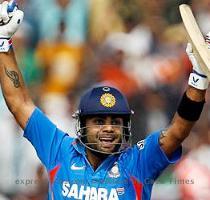 GUWAHATI, INDIA (GaeaTimes.com)- It was a remarkable day for Virat Kohli as he struck his second consecutive one day international (ODI) century, at the Nehru Stadium in Guwahati against New Zealand. He scored 105 runs off 104 balls, which is an amazing performance considering his recent entry to the Indian national team and against one of the most competent opponent, New Zealand.

Virat Kohli stroke 10 spectacular boundaries that took many people aback. Even few of the leading players, like Yuvraj Singh, could not score more than 42. This is his second consecutive century and the fourth over all century. Last month, his 118 runs against Australia, gave him a lot of appraisals and provided a new hope for the nation. Despite the stellar performance by Virat Kohli, soon India started losing all the important wickets and the score went to 8-257 from 3-220, with some amazing bowling techniques from New Zealand. Yusuf Pathan made a desperate attempt to take the score up with another 29 runs off 19 balls and three boundaries. The partnership between Virat Kohli and Gautam Gambhir also yielded a good score of 48 runs before Andy McKay took the skipper’s wicket. The partnership between Mahendra Singh Dhoni and Murali Vijay also came up with a good 44 runs. However, the latter was dismissed by Daryl Tuffey at 2-56. After a string of loss of wickets, Yuvraj Singh and Virat Kohli came for the rescue, with 88-run stand.

The 105 runs made by Virat Kohli was the only savior that took the team to a respectable score of 276 all-out in the first innings. He scored 100 off 100 balls, before his wicket was taken by Andy McKay and his ball was caught by Jamie How in the 43rd over.

CHENNAI - Delhi seized the initiative and held the upper hand as they pegged Tamil Nadu to 122 for f...

Cricket board promotes Raina to Grade A demoting Yuvraj

NEW DELHI - Yuvraj Singh has been dropped from Grade A in the central contracts of the Board of Cont...

CHENNAI - Virat Kohli again hit the purple patch with an unbeaten 119 as Delhi ended on 258 for thre...

NEW DELHI - Rajasthan defeated Hyderabad by an innings and 256 runs on the third and penultimate day...

NEW DELHI/CHENNAI - Delhi came back strongly on the second day to restrict Bengal for 473 in their f...

An exciting fare on the cards as Delhi takes on Bengal