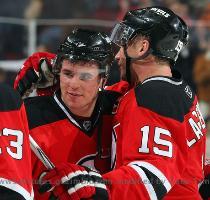 NEWARK (GaeaTimes.com)- The latest rumor surfacing in the camps of NHL is that Jamie Langenbrunner may soon quit his old team and move on to the Philadelphia Flyers. Although the news has gained no assurance but reports are abuzz that the New Jersey Devils’ captain will be joining a new team in the next season. Not much time is left for Jamie Langenbrunner’s contract with the New Jersey Devils to get over. Hence, it is not unusual for the Flyers to make prior preparations for hiring the Devils’s captain.

A source close to the Philadelphia Flyers revealed that of late the Philadelphia Flyers have been showing interest to add ace player Jamie Langenbrunner to their team. Reportedly, they had also fixed up meetings with the New Jersey Devils’ officials and held discussions. Recently, before the Devils versus Flyers match on Thursday, general manager Lou Lamoriello had asked the 35-year-old winger not to go into any kind of deals. However, after the match results came out, things are being counted in a different way. Speculations are arising that with the 4-2 loss of the New Jersey Devils to the Philadelphia Flyers, things might get reversed.

What Tiger Woods' mistresses have been up to after scandal?

WASHINGTON - A look at the women who were linked to professional golfer Tiger Woods has revealed tha...

LONDON - A Muslim cleric in Portsmouth was imprisoned for a year after sexually assaulting a young g...

Ashes: Oz selectors have avoided difficult decision for another week

SYDNEY - A former Australian cricketer has sarcastically said that the selectors should have named a...

Clarke pushes Hauritz's case but Chappell not buying yet

LONDON - Actress Jennifer Love Hewitt has been quietly ignoring rumours that she is dating actor Ale...

CANBERRA - A Victorian judge has suggested that some youths should be "put in a dark cupboard at 16 ...
Copyright© 2011 The Gaea Times