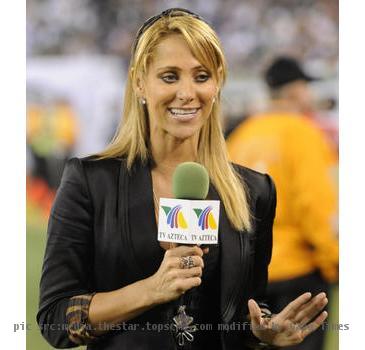 NEW YORK (GaeaTimes.com)- The reporter of Mexico’s Azteca channel, Ines Sainz has given an interview to a reputed magazine, where she said that she hold no grudges against New York Jets anymore. This comment comes months after the controversy surrounding the accusations and complains against the New York Jets players by the reporter herself. Back in 2010 September Ines Sainz complained that she faced sexual harassment at the locker room of the team when she went to take an interview of their quarterback Mark Sanchez.

Ines Sainz created headlines last September, when she complained about the New York Jets players and expressed her disappointment in the homepage of her social networking site. The reporter complained that she was subjected catcalls, whistles and sneering looks at the locker room of the team. Later, the owner of New York Jets, Woody Johnson apologized to the reporter for the unruly behavior of the members of his team. In her recent interview, Ines Sainz said that she never expected that last September’s incident would get so much attention.

NAGPUR - India defeated New Zealand by a innings and 198 runs on the fourth day of the third and the...

McQueen successor carries on his legacy with show that channels his dark, surreal vision

McQueen successor Burton carries on his legacyPARIS â In the months that followed Alexander McQ...

Azteca reporter gets offer to pose in the buff for Playboy

OSLO - The Chinese government has warned that relations with Norway could suffer should a Chinese di...