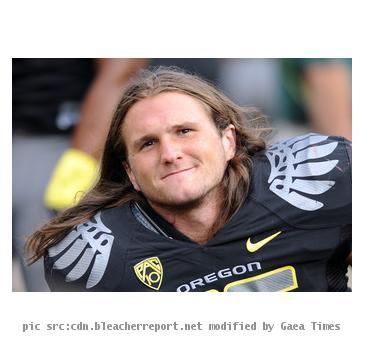 SCOTTSDALE (GaeaTimes.com)- How can you keep Casey Matthews away from being a most-talked-about name in the NFL when almost all members of his family have sometime or the other been a part of the National Football League? This Oregon linebacker had remained steadfast all through the game that took place last night against Auburn Tigers. Unfortunately, it was not his day. His team lost to the opponents despite trying his best. The player recorded 3 sacks, 73 tackles and 3 interceptions during his association with the Oregon Ducks this year.

Casey Matthews comes from a background of players. His dad Clay Matthews Jr. had remained a prominent player of NFL playing for Cleveland Browns while his uncle had remained a Hall of Fame linesman. The Oregon Player’s brother is known to play as a linebacker for the Green Bay Packers. Seems like the player is carrying forward the legacy of his family with the sporting prowess that he has been displaying. While talking to a media outlet, Casey Matthews said that his mom asked him to be “slightly insane” with last night’s game. That proved to be a driving force for the player as he tried his level best to keep up to the words of his mom but lady luck was not on the side of his team.

Last night’s game might have turned out to be a complete disaster for his team, Oregon Ducks but Casey Matthews‘ sporting skills have not gone unnoticed. He tried his level best all throughout last night’s game, but failed to ensure his team’s victory as the Oregon Ducks lost to the Auburn Tigers by 22-19.

Remarks by the President in Awarding the Medal of Honor to Staff Sergeant Salvatore A. Giunta

US workers alert after breach of data

WASHINGTON - More than 12,000 workers of a US government agency are facing the risk of identity thef...

PENNSYLVANIA (GaeaTimes.com) -- Result is out and the prediction comes true. Republican wins in ...

Remarks by the President at a DNC Event in Philadelphia, Pennsylvania

Remarks by the President and the Vice President at a DNC "Moving America Forward" Rally in Philadelphia, Pennsylvania

Specter to raise money for congressman who beat him in Pa.'s bitter Democratic Senate primary