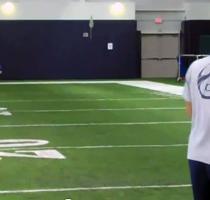 HARTFORD (GaeaTimes.com)- Any one who has seen the latest video of Johnny McEntee has one question that what made officials make Johnny McEntee stay away from the field last year. The young Connecticut Huskies quarterback is the latest YouTube sensation, all because of some of his flawless shots that has been captured in the video which has flooded all over the Internet. The 20-year-old player has won accolades from everyone who saw the video and were impressed with the brilliant shots that he rendered with his one and only favorite weapon, football.

The mind blowing shots that have been captured in the video shows the young quarterback indulge in some accurate magical shots, which is probably one of the reasons why the video has been named “Johnny Mac Trick Shot Quarterback”. Ardent Connecticut football fans must have showered praises on his fellow after watching the video, for those having an understanding of the game knows how wonderful they are. Johnny McEntee can be seen going for some amazing throws, after which he truly lends out trick shots as he knocks a water bottle off someone’s head and attempts for basket right from the stands of the Gampel Pavilion, attaining perfect success to it. He is even seen to break plates accurately when they are thrown in the air.

Making headlines with his latest trick shots video, which lasts almost for 5 minutes, it is for sure that Johnny McEntee has successfully managed to grab the attention of the football experts, hopefully opening some wider avenues for himself. This lad undoubtedly has proven that Caroline Doty is not the sole Husky in the Connecticut campus to possess some magic shots.

It's impossible to take a bad shot of Johnny Depp: Photog

NEW YORK - Legendary photographer Albert Watson has said that it is impossible to take a bad picture...

LOS ANGELES - Ryan Reynolds, the 34-year-old Canadian star of "The Proposal" and other mainstream hi...

ISLAMABAD - A Pashto singer from Mumbai, India, who has settled in Sweden, is making a big name for ...

GUANGZHOU - Indian men advanced while the women faltered in the first round of tennis doubles at the...

LONDON - Hollywood star Johnny Depp reveals that he bonded well with actress Angelina Jolie on their...

60 pc Brit women eye a man's bum when checking him out!

LONDON - A new survey has revealed that six in ten girls reckon a man's posterior as the most attra...
Copyright© 2011 The Gaea Times