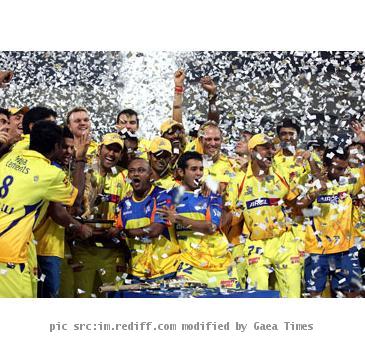 MUMBAI, INDIA (GaeaTimes.com)- All the fans of Chennai Super Kings were in for the biggest treat last night when the Mahendra Singh Dhoni led team defeated the home favorite Mumbai Indians in the finale of the third season of the Indian Premier League by 22 runs. The players of the Chennai Super Kings displayed amazing performances to beat the opponents and emerge as the IPL winner 2010. Although the large number of crowd gathered at the DY Patil Stadium must have been a bit disappointed about the fact that the home favorite Mumbai Indians failed to continue with the stunning feat that they were able to showcase throughout the tournament, the T20 cricketing extravaganza surely ensured that they nevertheless have a great time.

The IPL winner 2010, Chennai Super Kings choose to bat first and were successful in putting a total of 168 runs in the scoreboard after losing five wickets. Suresh Raina’s unbeaten score of 57 runs off just 35 balls enabled the Chennai Super Kings to set a target of 169 for the opponents. Despite the fact that a score of 169 could not be termed as an unachievable target, the Mumbai Indians failed to score the requisite number of runs as they were restricted by the IPL winner 2010 to 146 runs for nine wickets.

The Mumbai Indians had been leading the tournament since the very beginning and many cricket analyst had predicted that with their amazing feat, Sachin Tendulkar’s team would be able to be earn the title of IPL winner 2010. However, the Chennai Super Kings had been one of the most consistent teams of the T20 competition and their victory was not something that came as much of a surprise.

Warne says he thinks about playing 'whenever Ashes comes around'

SYDNEY - Former Australian leg-spinner Shane Warne has suggested that he can come out of retirement ...

Auction of players for IPL 4 in January

NEW DELHI - Ahmedabad and Rajkot are the two likely cities to bid for a slot in the Indian Premier L...

No decision on Kochi IPL; fourth season will have eight teams

MUMBAI - The fourth edition of the Indian Premier League (IPL) will have eight teams as the Governin...

WELLINGTON - Some of New Zealand's anonymous domestic cricketers are likely to make it to the cash-r...

SYDNEY - Cricket Australia is likely to reschedule its tour of Bangladesh in April 2011 to avoid a c...