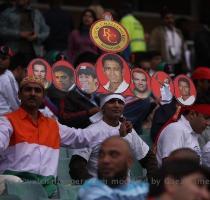 JOHANNESBURG, SOUTH AFRICA (GaeaTimes.com)- The highly anticipated Champions League T20 starts September 10 and cricket fans all over the world can look forward to watching some of the best domestic teams around the world competing for the coveted trophy. For the Indians, three teams from the IPL will be seen competing in the tournament. With just one day to go for the start of the tournament, the Indian cricket fans have been busy speculating which of their favorite stars will be seen playing in the competition.

The three teams competing from India in the Champions League T20 are the Chennai Superkings, Mumbai Indians and Royal Challengers Bangalore. Chennai Superkings captain and Indian skipper MS Dhoni will be one of the key players in the side. Being one of the most entertaining batsmen to watch in the T20 format, MS Dhoni’s side comes straight from the win in the IPL and with the likes of Mathew Hayden and Albie Morkel in it, they are sure to be one of the biggest contenders in the tournament. They will be facing the Central Stags from New Zealand in their first encounter on September 11 in Durban.

The Champions League T20 will open with a match between Mumbai Indians and the Highveld Lions from South Africa. The opening match is expected to gather huge crowds and TV audiences as Indian batting maestro Sachin Tendulkar will be seen leading the Mumbai Indian side in Johannesburg. Royal Challengers Bangalore will face the dangerous Guyana side in their first clash On September 12 at Centurion. The Anil Kumble led side will look to improve their T20 record after the heartbreaking semifinal loss in the IPL 2010.