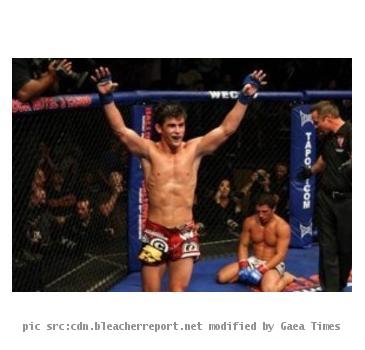 LAS VEGAS (GaeaTimes.com)- Mexican-American bantamweight champion Dominick Cruz reserved a stunning victory against American fighter Joseph Benavidez in a much anticipated WEC 50 main event which was held at the Palms Casino Resort in Las Vegas on Wednesday night. Earning the victory against his opponent during last night’s showdown must have been a whole new experience for the bantamweight champion as this was his very first bout in which he defended the title that he was able to clinch on March 6, this year.

All the fans of Dominick Cruz who were witness to the bout had something to look forward to throughout the fight as the 25-year-old fighter went to score neat takedowns in the successive rounds before he clinched victory with a split decision. Among the three judges, two of them gave the final score in his favor by 48-47 and 49-46 while the third one chose to go with Joseph Benavidez by 48-47. While responding to his win later, Dominick Cruz told the reporters that during the fight he mainly concentrated on doing what he is known to do best and that is staying hard to hit. The defending bantamweight fighter who was profusely bleeding by the time the fight came to an end further added in the post-fight interview that it was obvious his strategy of staying hard to hit failed to work out in all the exchanges.

Although Dominick Cruz was successful in tasting victory at the end of WEC 50 main event last night, his showdown with Joseph Benavidez was indeed a very close one with both the fighters left bruised as well as bleeding at the end.