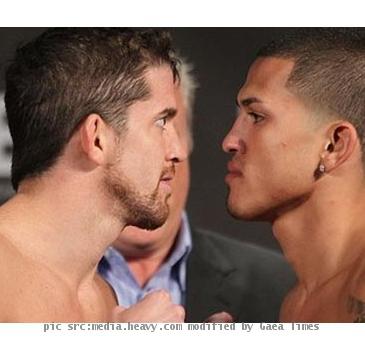 LAS VEGAS (GaeaTimes.com)- The WEC 50 game on Wednesday night between Anthony Pettis and Shane Roller at The Palm turned out to be one of the most interesting and exciting game as both contenders tried their best to win the fight. The fighters in the WEC 50 title event went for a back and forth battle all over the ring that ultimately came to an end at 4:51 minutes into the third round. Shane Roller although came up with some brilliant moves, he lagged behind 2-0 and was on his way to lose the third when he went for a broke. However, taking the opportunity, Anthony Pettis went for a triangle choke and won the game. Anthony Pettis will now face the WEC champion Ben Henderson to win the title.

After the win of the WEC 50 event, an elated Anthony Pettis said that taking down Shane Roller was “pretty good”. He praised his opponent as a tough guy and added that he had never been hit so many times in his face. As for Shane Roller, the fighter maintained that it was one of those nights when things were not “clicking”.