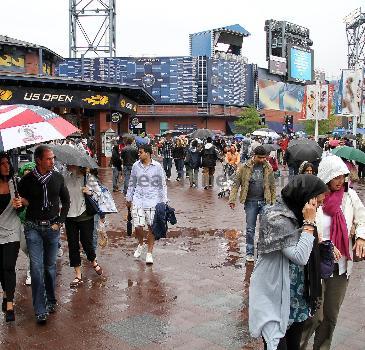 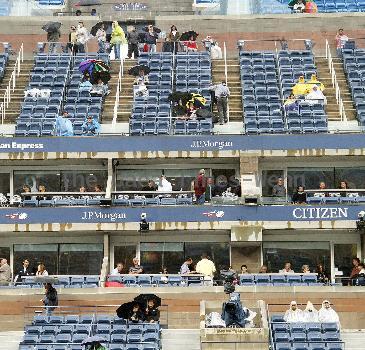 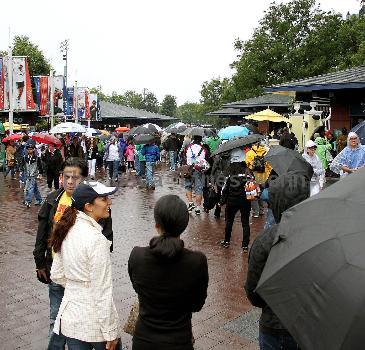 NEW YORK — Chasing his first U.S. Open championship, Rafael Nadal was so dominant, so determined, so defiant, his face curling into a sneer with every wallop of the ball.

With two marvelous weeks at Flushing Meadows capped by victory in a thrilling final Monday night, Nadal fashioned an emphatic answer to all those questions about whether he could grab the only major trophy missing from his collection.

Now owner of a career Grand Slam at age 24, champion at three consecutive major tournaments and nine overall, the No. 1-ranked Nadal is suddenly chasing something else: recognition as the greatest tennis player in history.

Approaching perfection for stretches — the guy played more than 40 points in a row without making an unforced error — Nadal beat Novak Djokovic 6-4, 5-7, 6-4, 6-2 in a match filled with fantastic shotmaking by both men and interrupted by a thunderstorm a day after it was postponed by rain.

“For the first time in my career, I played a very, very good match in this tournament,” said Nadal, who never had been past the semifinals at Flushing Meadows. “That’s my feeling, no? I played my best match in the U.S. Open at the most important moment.”

Once seen as Roger Federer’s nemesis, Nadal has made his own greatness quite clear — and is more than halfway to Federer’s career record of 16 Grand Slam titles. Nadal’s total already is one more than Jimmy Connors, Andre Agassi or Ivan Lendl won.

It’s clear where Nadal stands on the matter. He said “talk about if I am better or worse than Roger is stupid, because the titles say he’s much better than me.”

Djokovic, understandably, had a different take on Nadal.

“He has the capabilities already now to become the best player ever,” said Djokovic, who lost the 2007 U.S. Open final to Federer, but upset him in Saturday’s semifinals. “I think (Nadal is) playing the best tennis that I’ve ever seen him play on hard courts. He has improved his serve drastically — the speed, the accuracy. And, of course, his baseline (game) is as good as ever.”

Bjorn Borg was the only other man to have nine major championships by 24.

“It’s too far; 16, for me, is too far to think about right now,” Nadal said, with his typical humility. “My goal, all my life, was the same: keep improving.”

He takes that task seriously. When he started on tour his forehand was feared, his backhand wasn’t, so he worked on that. Then he got better at volleying. He says he decided a couple of days before the start of the U.S. Open to tweak the way he holds his racket to serve.

That added zip to his serves, now regularly faster than 130 mph, which helps him earn some easy points — important given the way he hustles so much and hits so hard, those booming forehands looking like uppercuts. He won 106 of 111 service games in the tournament, a key reason he finally came through in New York.

Everyone, even Nadal himself, used to try to explain why he kept leaving the U.S. Open without a trophy, why it was the only Grand Slam tournament he hadn’t conquered.

“The hard court,” he said, “always was the most difficult surface … for me.”

Here’s how the thinking went: His grinding style exhausts him. The wind plays havoc with his spin-lathered strokes. The courts are too hard and too fast. The balls are too soft. And so on.

“Now no one can say he can’t win here,” said Toni Nadal, Rafael’s uncle and coach. “It’s very important for us to know that Rafael has learned so much, because players said Rafa could never win on hard courts, because he played too much topspin (or) he’s too physical. And now I believe there’s not much that the players he plays against can argue with.”

Nadal is first left-hander to win the U.S. Open since John McEnroe in 1984, and the first Spaniard since Manuel Orantes in 1975.

Nadal first burst onto the scene as the so-called King of Clay, compiling a record 81-match winning streak on that surface and starting his French Open career 31-0. His five titles at Roland Garros have earned him accolades as the best clay-court player in history, but now he has become so much more.

He won on the grass at Wimbledon in 2007, edging Federer 9-7 in the fifth set as darkness descended, then again this year. He won on the hard courts at the Australian Open in 2009, again besting Federer in five sets.

All that was left was the U.S. Open. After complaining of fatigue in 2008, coming off his gold medal from the Beijing Olympics, then dealing with bad knees and a torn abdominal muscle in 2009, he set out to make this trip to Flushing Meadows different.

He curtailed his schedule a bit in the spring, to save some wear and tear. He took extra time off after Wimbledon, getting treatment on his knees and skipping the Davis Cup quarterfinals.

It all worked. Nadal only had one blip all tournament: The second set Monday evening. Perhaps bothered by some pro-Djokovic supporters yelling between serves — earning an admonishment from the chair umpire — Nadal fell behind 3-1 by making four mistakes, including a double-fault, to get broken at love.

When Nadal pushed a backhand long to close a 19-shot point, 2008 Australian Open champion Djokovic screamed, “Come on!” It was part of a run of 11 consecutive points for Djokovic, who went ahead 4-1.

As quickly as Nadal lost his way, however, he gathered himself, his strokes gaining steam, his footwork as good as ever. A violent backhand on a 23-stroke exchange allowed Nadal to break back, and he held to 4-all, which is when there was a two-hour rain delay.

Djokovic took that set — the only one of 22 played by Nadal in New York this year that he lost. He came oh-so-close to being the first man in a half-century to win this tournament without dropping a set.

“Nadal … is just proving each day, each year, that he’s getting better. That’s what’s so frustrating, a little bit. He’s getting better each time you play him,” Djokovic said. “He’s so mentally strong and dedicated to this sport. He has all the capabilities, everything he needs, in order to be the biggest ever.”

Nadal stretched his Grand Slam winning streak to 21 matches by adding the U.S. Open to his titles at the French Open in June, then Wimbledon in July. No man had won those three tournaments in the same year since Rod Laver won a true Grand Slam in 1969. Now Nadal heads to the Australian Open in January with a chance to claim a Rafa Slam of four consecutive major championships — something that also hasn’t been done since Laver.

Djokovic, who overtakes Federer at No. 2 in the rankings this week, made Nadal earn it. The Serb played superbly for long stretches, showing off terrific returning, retrieving and a big forehand.

Coming out of the rain delay with Djokovic serving at 4-all, 30-all in the second set, both players clearly benefited from a bit of rest. Fresh of body and clear of mind, and with conditions perfect for tennis — calm and cool, the temperature in the 70s — they were superb, engaging in 10-, 15-, 20-stroke points that drew standing ovations and camera flashes from the stands, no matter who hit the winner.

And there were winners aplenty at both ends — 49 by Nadal, 45 by Djokovic — as well as point-extending defense, sneakers squeaking as they scurried around the court. The key, perhaps, was this: Nadal made only two unforced errors in the fourth set. It’s not as though he was playing safe, either, cranking up his groundstrokes and aiming for the lines.

Nadal was back to his relentless best in the third and fourth, hitting shots so well that Djokovic was moved to applaud on occasion. A drop volley here; a running backhand passing winner there; most delivered with a sneer.

Nadal broke for 2-1 leads in each of those last two sets. As the finish line approached, Toni Nadal kept putting his palms down and motioning to his nephew to keep calm. That he did, arriving at match point by sprinting to reach a drop shot and whipping a forehand that landed right on the baseline.

When Djokovic hit a forehand wide to end it second later, Nadal fell backward onto the court with a shout. He rolled onto his stomach, and placed his forehand on his arms, savoring the moment.

About a half-hour later, the 2010 U.S. Open champion carried his shiny new trophy into the player garden outside Arthur Ashe Stadium. His uncle followed, toting a bottle of champagne in each hand. A couple of dozen relatives and friends gathered around, sipping the bubbly and taking photos.

Like a family picnic, only not at a neighborhood park, but at the biggest Grand Slam tennis arena there is.

Amid the celebration, Toni Nadal was asked where his nephew stands in the tennis pantheon.

“The best of all time Federer, Borg, Laver. They’re the best. Rafael is very far away from those guys. Rafael is a good player. I think he’s a very good player,” Uncle Toni said. “But I don’t know if he’s part of that group.”

Could he be, one day?

By then — if not sooner — maybe the rest of the world can, too.