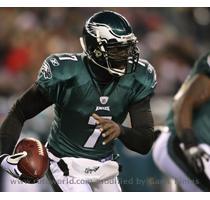 ANNAPOLIS (GaeaTimes.com)- It was probably one of the most historic victory for the Philadelphia Eagles yesterday against the Washington Redskins on Monday, week 10 of the NLF. The Eagles gave a humiliating defeat to the Redskins with a score of 59-28, with the remarkable performance from its left handed quarterback, Michael Vick. The Redskins were left with no other options but to regret their sluggish performance which got subdued by the Eagles. However, many critics are under the impression that even a better performance from the Redskins would not have been much of the help to the team as its opponent’s performance was better than the average.

Michael Vick created a record by being the first NLF player to throw three touchdowns and run for two in a first half. This gave his team a lead of 45-14 by the half-time. However, that was not enough for the player as he went ahead to throw 333 yards and four touchdowns, while running for two more touchdowns. He ran eight times for 80 yards, while completing 20-of-28 passes. He performance gave his team a 45-14 lead by the half-time edge, while he made two touch downs and ran for two more. Within nine seconds of the second quarter, The Eagles took a lead of 35-0, against the Redskins, while during the break, Michael Vick made 14-for-18 for 264 yards and three touchdowns.

Experts said that no amount of resistance could stop the player from performing better than the average. However, they also say that his pace was so high, that even a better resistance from the Redskins, could not have stopped the opponents from winning the match. It was not much of a challenge for Michael Vick to score 49 points in a standard scoring setup. This includes 6 for rushing TDs, 4 points for passing touchdowns, 1 point per 25 passing yards and 1 point per 10 rushing.

NEW YORK - A new study has revealed that Indians and Chinese managers are rated the best amongst the...

LONDON - British Muslim pupils, as young as six, are being taught how to chop off thieves' hands...

British kids learn how to hack off thieves' hands

LONDON - Children as young as six in Britain are being taught brutal Sharia law punishments, includi...