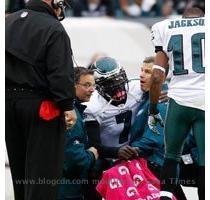 PENNSYLVANIA, (GaeaTimes.com)- Michael Vick, one of the most competent quarterbacks of Philadelphia Eagles had an unfortunate rib and chest injury, while the game was on. This prompted the player to quit the game in the very first quarter. The match against the Washington Redskins, played at Lincoln Financial Field, in Pennsylvania, Philadelphia, made the home team loss to Washington, with a score of 17-12.

The Sunday match became the hottest topic of discussion for the NFL fans and members. Michael Vick, was getting the pain before the match started. He even told his team mates about his pain before the match began. However, he ignored the severity of the pain and decided to take a risk for the sake of his team. By the quarter, the injury took a severe turn and he had to leave the game, replacing himself with Kevin Kolb. Kevin Kolb played a good game, but, it was also proved that Philadelphia Eagles cannot get a smooth ride without Michael Vick. The longest run of Kevin Kolb for the day was 18 yards. Two other players from whom a better game was expected were, receivers DeSean Jackson and Jeremy Maclin, who could not make any touchdowns and combined for four catches for 34 yards.

After the injury, the media reported that Michael Vick has broken a few ribs, but an Eagles’ executive denied the rumor. Michael Vick himself does not know what exactly has happened to him, but he will soon undergo a MRI test to diagnose the problem. Till then he has been asked to avoid playing in the upcoming games, especially, the one to be played against the San Francisco 49ers. Two other players, namely Asante Samuel and Riley Cooper, also had a minor injury in this match.