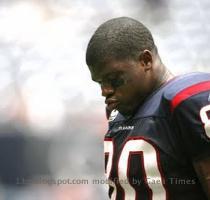 SAN FRANCISCO (GaeaTimes.com)- Andre Johnson got lucky this time, escaping a suspension which was quite possible owing to his un-sportsman like conduct in Sunday’s match between his team Houston Texans and the Tennessee Titans. Andre Johnson had got into a nasty fight with Tennessee Titans’ corner back Cortland Finnegan for which he had to pay of $25,000. That Andre Johnson has not been suspended came up as a confirmation on Tuesday from a NFL spokesperson.

After the news came of the fine came up, Andre Johnson wrote in the Houston Texans’ website that though he was happy that he was not suspended for the fight but at the same time he was disturbed by his own actions. The wide receiver had apologized for his conduct later on. On the other hand, Tennessee Titans coach Jeff Fisher has said that Cortland Finnegan did not do any such thing which could have got him suspended.

Peter Andre to perform with son

LONDON - Singer Peter Andre will be performing with his five-year-old son Junior during his British ...

LOS ANGELES (GaeaTimes.com)- Hair problems are the biggest enemy of any girl who loves her t...

Peter Andre down with mystery illness

LONDON - Singer Peter Andre has been struck by a mystery illness. The "Mysterious Girl" hitmake...

Manhunt on for murderers of Indian-origin woman in South Africa

CAPETOWN - A manhunt has been launched for the men who killed a newlywed Indian-origin woman, ...

WASHINGTON - A conservative advocacy group has urged the US Justice Department to investigate a wee...
Copyright© 2010 The Gaea Times