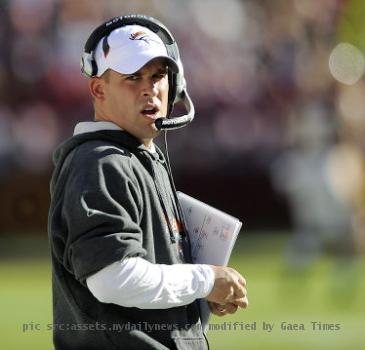 ENGLEWOOD (GaeaTimes.com)- In what has come as huge shock to the NFL fraternity, Denver Broncos head coach Josh McDaniels was terminated by team owner Pat Bowlen on Monday. The 34-year-old coach who was hired by the Denver Broncos in the month of January last year, was fired from his position with two years left in his contract. When the former New England Patriots defensive coordinator was employed by Pat Bowlen last year, hopes were running high from the head coach as many felt that Josh McDaniels would be able to bring along with himself that winning patterns of the Patriots. However, what followed was a huge array of losses for the Denver Broncos, resulting in the worst stint for the team in almost four decades.

Pat Bowlen, the owner of the Denver Broncos later said in a statement that his decision to fire Josh McDaniels was not taken very lightly but he was not left with much of an option given the dismal results of the team. The Denver Broncos owner further added that he had to take the difficult decision for the organization as well as its ardent followers. According to insiders, even the Broncos players did not know about Josh McDaniels‘ termination which they later came to know after the head coach was already fired on Monday.

After being fired, Josh McDaniels released a statement through the public relations department of the team in which he thanked Pat Bowlen and the rest of the organization for providing him with the chance to serve as the head coach of such a proud franchise. The former Denver Broncos coach also added that he wished nothing but the best for the team in the future.