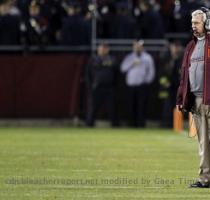 MIAMI (GaeaTimes.com)- Last night six more players missed out the the game between Virginia Tech Hokies and Stanford at the Orange Bowl. These players were supposed to play for the Virginia Tech Hokies whom head coach Frank Beamer suspended from the game. On Sunday Frank Beamer announced that he had barred six Virginia Tech players from appearing at the Orange Bowl since they had violated the team discipline. However, he refused to divulge in the names of the six players whom he had punished. Neither did he cite the exact cause behind the punishment.

Frank Beamer after announcing the news added that the players whom he had suspended were not vital for the team. Last night’s defeat of the team to No.5 Stanford certainly came up as a contradiction to the statement made by the head coach a day before the game. These six were not the first ones to get suspended by the coach. Earlier David Wilson and Antone Exum were also suspended from playing the match. However, these two Tech players were barred from playing only during the first quarter of the game.

Frank Beamer announced that since they had broken the team rules he straight away sent them back to Blasckburg by bus. Since no reasons were given out the matter naturally got subjected to various speculations. Many are guessing that it was quite likely that the six players had broken the curfew. The reason behind this speculation is not uncommon since David Wilson and Antone Exum were suspended for this. One thing is for that whatever the consequences may emerge Virginia Tech Hokies head coach will never tolerate any kind of indiscipline from the boys.

India can play key role at Cancun: US

At 64, ex-IAF man goes back to college

ROBERTSGANJ - He is a retired Indian Air Force (IAF) serviceman with two grown-up sons who are well ...

NEW DELHI - India has voiced its disappointment over Pakistan's critical remarks on the US support f...

'Autobiography of Mark Twain' a big hit across US

Terry says not bitter or angry about losing England captaincy

LONDON - Chelsea skipper John Terry has said that he is not bitter or angry about losing the Englan...

Exercise important for those at special risk for Alzheimer's

WASHINGTON - People who are more prone to cognitive decline, including development of Alzheimer's di...

SAN FRANCISCO (GaeaTimes.com)- With Black Friday approaching the top US retailers are trying to ...
Copyright© 2011 The Gaea Times