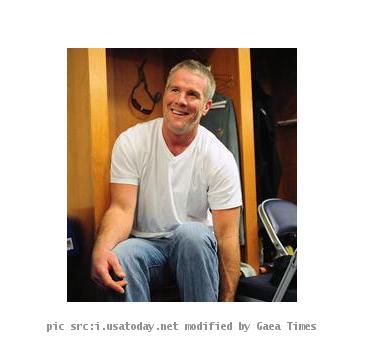 NEW YORK (GaeaTimes.com)- Minnesota Vikings’ Quarterback Brett Favre has been sued yet again for sending sexually explicit text messages and surprisingly, this time, not by Jenn Sterger but by two massage therapists Christina Scavo and Shannon O’Toole. The media outlets reported that these two massage therapists sued Brett Favre, New York Jets team and also their massage coordinator on Monday in Manhattan court. In the lawsuit, they claimed that the ‘most career touchdown passes’ record holder used to send them sleazy messages in 2008 after they gave provided a massage therapy to him in their summer training camp.

Christina Scavo and Shannon O’Toole stated in the law suit that Brett Favre sent a third unnamed massage therapist saying that he wanted to “get together” with her and Christina Scavo. Another text allegedly read that he was feeling lonely at night and hence he has some ‘bad’ intentions. The two therapists also stated few more text messages to prove their point to the court. On the other hand, the law suit also claimed that just because Christina Scavo did not respond to such sleazy messages, she and Shannon O’Toole were not hired by New York Jets team.

Christina Aguilera Performs At The AMAs

LOS ANGELES (GaeaTimes.com)- The AMAs this year saw some stellar performances by some of the b...

Christina Aguilera says being a single mum is hard

LONDON - Christina Aguilera has spoken out about being a single mum to son Max after split from husb...

LONDON - While shooting for her debut movie 'Burlesque', Christina Aguilera got so many bruises that...

SAN FRANCISCO (GaeaTimes.com)- For all those who have been wondering who the hottie is in th...

What celebs do to avoid being caught on a date!

WASHINGTON - Many celebrities have tried their best to avoid being seen going out on a date, and som...