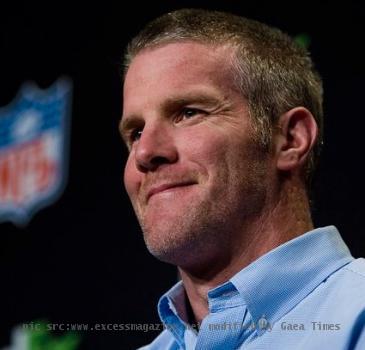 PROVIDENCE, (GaeaTimes.com)- It has been a bad week for the Minnesota Quarterback Brett Favre. First, he fractured both his ankles and yet decided to play in the Sunday’s match against New England Patriots. Even in that game, his chin was badly hit by Patriots defensive lineman Myron Pryorm, midway through the fourth quarter of the game.

His chin and jaw was so injured, that he had to be carted off the field, as he was holding his jaws. Later on the other members of his team announced that he sustained a laceration to his chin and had to be given eight stitches. Brett Favre was immediately replaced by Tarvaris Jackson. However, the good news is, recently in an interview, Brett Favre said that his chin injury has healed significantly and he is expecting to be back in the game against the New England Patriots on Sunday. He is also confident about playing well enough to win that game. The player however, is still suffering from the pain in his ankle. He said that most of the pain are located around his toes than the ankles. He reportedly had an elaborate discussion with his trainers and equipment staff about how can he play the game with the injuries. He has been suggested to wear size 15 shoe, which is one size bigger than his normal, so that equipment stuff can put in the toe box for his precaution. They have created a mold for him that would act as a substitute for steel-toed shoe. His feet will also be properly taped so that its movements are restricted for sometime and he can recover completely by his next match.

The coach of Brett Favre, Brad Childress said that in case the quarterback does not completely recover his chin and ankle injury, Tarvaris Jackson will continue to play in his position. However, the player has assured that he would be back. Brad Childress will wait till the final hour to decide whether to allow him to play or not.