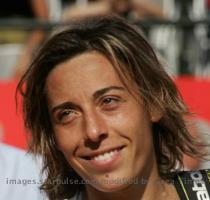 MELBOURNE (GaeaTimes.com)- Audience who had turned up on Sunday at the Melbourne Park to witness the action between Francesca Schiavone and Svetlana Kuznetsova indeed had a great action packed session as they got to watch a record breaking marathon match between the two females. The match that ultimately went in the favor of Francesca Schiavone made her taste success after a long hard fight. The whole game session lasted for a total of four hours and 44 seconds.

As the two continued to fight it out against one another, spectators saw both the players advancing towards a physical exhaustion. The exhaustion was obvious since the match did not show any sign of coming towards a short ending. Both of them struggled hard as they in no mood to give away the hope of winning the grand slam title. Francesca Schiavone was even seen heading for along medical time during 11-10. The 14th seed won the game over her 30th seed Russian rival by defeating her by 6-4, 1-6, 16-14. Svetlana Kuznetsova too fought it hard against Francesca Schiavone as she managed to save two points and signaled for a sharp return. However, her hopes got dashed out as she could not succumb to the final harm done to her by Francesca Schiavone who managed to save six match points at the third set when the action had reached its pinnacle.

With the match finally coming to an end it became evident that Francesca Schiavone now will be playing her the next match for the quarterfinal against top seed Caroline Wozniacki. This marathon match has broken the record of a last year match that was played between Barbora Zahlavova Strycova and Regina Kulikova for four hours and 19 minutes.

LONDON - Astronomers have been baffled over an exceptionally massive black hole that is travelling a...

Remarks by the President at a "Moving America Forward" Town Hall

1 step forward, often 2 back at Commonwealth GamesNEW DELHI â The pool water is clean, but the ...

C'Wealth organizers may give away free ticketsNEW DELHI â The empty stadiums that marred the fi...