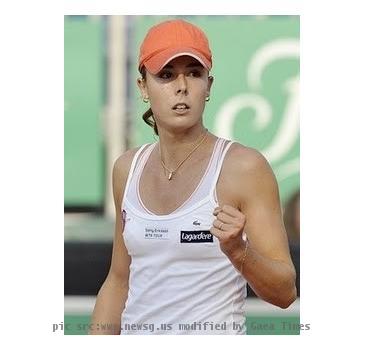 MELBOURNE, AUSTRALIA (GaeaTimes.com)- The Melbourne Park in Australia, which is hosting the Australian Open 2011, is witnessing more controversies than tennis. Most of these controversies are centered around the female tennis players, who are apparently playing “Go As You Like”, more than the game they are actually meant to paly. After Venus William’s dressed up as tasty and delicious “Cheese Onion pasty”, it was time for Alize Cornet to display her see through top while playing for the Women’s Single Third Round.

Alize Cornet was wearing a short white skirt and a very revealing see through top. Sources say that she surpassed the limit of what was “acceptable” and was not aligning to the dress code that is mandatory for all players to follow. According to the rules and regulation, any player who does not abide by the dress code of the tournament, should be fined with $ 2,000. Margaret Court, who happens to be one of the biggest Australian tennis player said that tennis is not a sport that is meant to “show everything”, neither does it permit a player to get all “sticky”. She also added that everyone had an open view about Alize Cornet, before the tournament.

However, apart from the see through top worn by Alize Cornet, what made her come to the news once again was her defeat to Kim Clijsters. The match ended with a final score of 76(3), 63. However, it must be real bad for the player as she got involved in this controversy and then lost the match, right on her birthday, which falls on January 22. It seems that her birthday failed to get good luck for the player this time.

Maria Sharapova cruises into Stasbourg quarterfinals after win against qualifier

Vania King of the United States reaches quarterfinals in Strasbourg