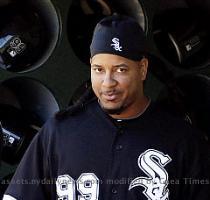 TAMPA (GaeaTimes.com)- The latest deal announcement of the Tampa Bay Rays saw the re-union of former teammates Manny Ramirez and Johnny Damon. On Friday, a major deal was struck in the baseball arena as Tampa Bay Rays announced that the team has decided to hire the two veteran players for their side. The news has revealed that both of them has been given a contract of one year to play for the Rays.

Although both received a one year deal, the payment is certainly varying. While the Tampa Bay Rays decided to hire Johnny Damon for a whopping $5.25 million deal, the team did not go much high while it came to paying Manny Ramirez. Manny Ramirez has been roped in for a $2 million deal. Both the veteran players were former teammates at the Boston Red Sox. Tampa Bay Rays decided to hire the two after the team was left without any of its crucial players, all of whom had deserted the team in this recent winter deal. All those who left the Tampa Bay Rays for better prospects include Carl Crawford, Rafael Soriano, Carlos Pena, Matt Garza, Jason Bartlett.

Although, baseball experts have opined that the offensive production of both Johnny Damon and Manny Ramirez have come down in the recent years, Tampa Bay Rays seem to pay not much heed to it. Afterall there is not much choice left at the hands of the Rays. Last year the Tampa Bay Rays had successfully won the American League East with so many vital players in the team. This time however, the team hopes to render a tough competition to the other competitors while they go to play for the championship.

LOS ANGELES (GaeaTimes.com)- In the much anticipated "Dexter" season 5 episode 8 the audienc...

ARLINGTON (GaeaTimes.com)- Antonio Margarito's loss to Manny Pacquiao was not enough to make...

ARLINGTON (GaeaTimes.com)- Many people were anticipating the obvious victory of Manny Pacquiao...

ARLINGTON (GaeaTimes.com)- In what was one of the most anticipated fights in recent history, M...

NEW YORK - The musicians who claim that the Black Eyed Peas stole material for their hit songs "I Go...