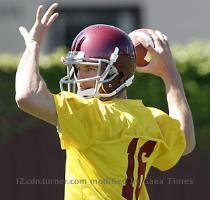 LOS ANGELES (GaeaTimes.com)- After former Trojan Everson Griffen got arrested on Monday, news of the arrest of one more former USC Trojan hit the headlines after Mitch Mustain was arrested on Tuesday for being a suspect in drug selling. The 22 year old former USC Trojan was arrested on Tuesday night at 8 p.m. PT by the Los Angeles police when investigators smelled crime with the quarterback after his involvement got busted through a sting operation.

According to sources, Mitch Mustain was taken to a Los Angeles jail where the bond of the bail was made at $30,000. It is being reported that the nation’s top back-up quarterback of 2006 still has not been released by the Los Angeles police for surprisingly his bail still remains to be paid. Los Angeles Police Department Bruce Borihanh told that the police have held the player back on the grounds of a felony narcotics charge. A source close to this case said that it is possible that the law might be somewhat lenient towards Mitch Mustain since it was his first brush with the crime scenario. Although it has come up that Mike Mustain’s involvement in the drug selling got exposed through sting operation but investigators are yet to provide details about the operation.

Mike Mustain had joined the USC Trojans in 2007 after he had a fall out with his home-team Arkansas coach Houston Nutt. Although he did not succeed in overcoming Mark Sanchez but until now he was being considered as a NFL prospect, but now with his recent arrest, his prospects are sure to receive a heavy blow. Everson Griffen, however, was arrested on suspicion of felony battery.

WASHINGTON - US President Barack Obama said Thursday he will hold a meeting with top Republicans lat...

Remarks by the President After a Cabinet Meeting

WASHINGTON - US President Barack Obama took responsibility for the voter discontent that led to the ...

Press Conference by the President