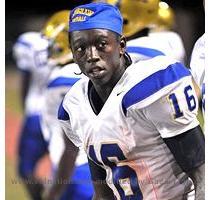 LOS ANGELES (GaeaTimes.com)- Oregon Ducks on Wednesday made one of their biggest catch after five star football prospect De’Anthony Thomas announced that he will move on to the Oregon Ducks for his next season. The news was the biggest shock for the USC Trojans who had taken it for granted that the player would join them and no one else after the 5-foot-9 had promised the team in last spring that he would choose the Trojans for the 2011 session.

Last year, the Los Angeles Crenshaw running back/corner back De’Anthony Thomas had lent a verbal commitment to the USC Trojans that after he finishes completes his senior year at Crenshaw, he would go with the Trojans whose list is still considered as one of the top ten recruits of the nation. However, things seemed to get a little different after De’Anthony Thomas visited Oregon last week. It was his last weekend trip that took decisions for a reconsideration. Buzz has it that the trip was a step ahead towards the decision to enter in an agreement with the Ducks. However, confirmation was only received after Wednesday night when he player cleared every speculation.

It was evident that the young talent was getting emotional as he announced his plans to be the Oregon Ducks for he said that he would once again come back to Los Angeles Crenshaw to coach the team after his football career gets over. De’Anthony Thomas said that he would be comfortable with the Oregon Ducks players and with the team’s offense. Last week’s visit indeed has left a powerful impression on the 19 year old player who now is hoping for a good stay with his new team.