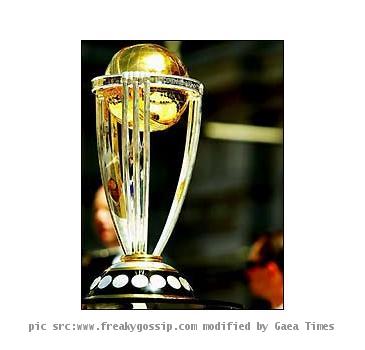 MUMBAI, INDIA (GaeaTimes.com)- The much awaited ICC World Cup schedule has been declared to bring an end to the anxiety and await, of all those cricket freaks all over the world, who have been waiting for the 2011 world cup for the last four years. Even the venues of the deadly matches have been decided by the authorities.

According to the World Cup Schedule, the match would start on February 19, although the opening ceremony will take place in Dhaka on February 17. This time, the matches would be hosted by three countries, India, Bangladesh and SriLanka. Initially, India and Pakistan were supposed to host the match. However, the growing tension of extremism and terrorism, made the authorities settle for the three other Asian countries. Nevertheless, that gave a good opportunity for Bangladesh, to host the event in its land for the first time in the history of World Cup. The teams have been decided into two groups A and B. Group A include Australia, New Zealand, Pakistan, Sri Lanka, Zimbabwe, Canada, Kenya and Group B include Bangladesh, England, India, South Africa, West Indies, Ireland, Netherlands. The opening game would clash between India and Bangladesh, the two neighboring countries, on February 19 at Shere Bangla National Stadium in Mirpur, Dhaka.

The rest of the games will be followed in the other venues all over the three countries. New Zealand and Kenya will play the next game on the following day in Chennai. The World Cup Schedule has assigned Bangladesh to host seven matches in Dhaka and Chittagong. Similarly, SriLanka will be hosting 12 matches, while the rest of the matches will be hosted by India. The match would be concluded on April 2, in Wankhede Stadium in Mumbai.