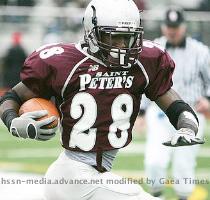 JERSEY CITY (GaeaTimes.com)- Team North Carolina missed it by a whisk as Savon Huggins on Friday gave his verbal commitment to the Rutgers Scarlet Knights for the new season. The running back was successfully able to achieve the dramatic end as he went on to give a shock to the Rutgers by sporting a North Carolina cap all a sudden! The moment had indeed seized team Rutgers and all its fans with panic but the player gradually unleashed his real intention as he took off the North Carolina cap and donned a Rutgers Scarlet Knights cap instead.

All this was a part of the live drama that the St. Peters running back smilingly rendered out moments before the press conference at Jersey City as he made his way ahead to the Harry Siperstein Library. Although no legal confirmation has been made since Savon Huggins cannot sign a letter of intent until Wednesday but his actions have proved that he will go nowhere else but be with the Rutgers Scarlet Knights. Team Rutgers at the present moment is certainly on a high for the noted running back has lived upto their expectations by choosing them over North Carolina and Notre Dam.

Savon Huggins in the past season ran for 1,891 yards and 35 touchdowns while playing for the St. Peters High School. His performance makes it evident that he is in the top form which is why he is now being compared to Ray Rice, Rutger’s former running back who left the team after his completion in the junior year to play for the NFL. Team Rutgers however has declined to compare Savon Huggins‘ performance with Ray Rice.

Huggins poised to tackle success at St. Peter'sJERSEY CITY, N.J. — Savon Huggins could be the ...

East region's recruiting talent starts in Ohio The state of Ohio has its share of high sch...