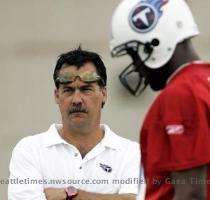 NASHVILLE (GaeaTimes.com)- The football arena was rendered an all of a sudden shock after the Tennessee Titans on Thursday night anno0unced that the team will no longer have Jeff Fisher as their head coach. That the 52 year old coach who has been the longest-tenured coach of NFL will no longer stick to his loyal franchise, the Tennessee Titans was confirmed by the team itself in an official statement that they released on Thursday night.

The team’s announcement has given a shock to everyone, since it was a few days back that the Tennessee Titans’ owner Bud Adams had publicly announced that he intends to keep the experienced head coach with the team. Instead he had said that the team may either release or may trade in quarterback Vince Young. Both Jeff Fisher and Vince Young shared an awful relationship with became all the more promiscuous after the two were seen surviving a battle against each other. Speculations are abuzz that the parting ways of Jeff Fisher with the Tennessee Titans may be an outcome of the clash in between the two. Whatever, the actual reason may be, at the end none of the two has been able to survive with the team.

According to sources, there are even rumors of Jeff Fisher now moving on to the Philadelphia Eagles camp. Reportedly, there are developments of Jeff Fisher being hired as the next Eagles’ defensive coordinator. With the long term relationship of Jeff Fisher with the Tennessee Titans coming to a decisive end, every one is getting impatient for the much awaited announcement of the name of the next head coach of the Tennessee Titans. In all chances Mike Munchak, the team’s offensive-line coach may be named for the vacant position.

LONDON - A Las Vegas businessman has come up with a special underwear that has a strategically place...

WASHINGTON - A firefighter and a female city employee have been fired after they were caught ...

LONDON - It is true - good-looking people do earn more than average-lookers. The new illustrated ve...

WASHINGTON - A new study questions whether it's a good idea to follow 'the "wisdom of crowds' while ...

POMONA (GaeaTimes.com)- The Automobile Club of Southern California NHRA Finals, which have too...

If you don't like a gift, just swap it online

NASHVILLE (GaeaTimes.com)- On Wednesday night, the Sugarland Duo Jennifer Nettles and Kristian B...

Rudd 'roasted for gate-crashing' Clinton's 'Q and A show'

CANBERRA - Australian Foreign Minister Kevin Rudd has been condemned for demanding a place to shar...