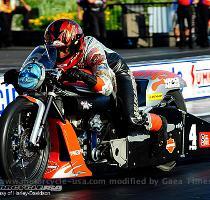 However, it was John force who took the maximum attention as he reached his 213th final round and the 11th for this season. He started the quarter final with Kenny Bernstein, Tony Pedregon, Bruce Sarver, Tommy Johnson Jr, Del Worsham, Jack Beckman, and Jeff Arend. However, in the finals he defeated Jeff Arend with 4.085, 310.41, while the latter was left with 4.109, 307.65. Shane Gray reached the final with Big O Tires Pontiac past Dave Connolly with a 6.60. He raced against Jeg Coughlin in the finals, where the score was 6.566, 209.20 for Shane Gray and 6.568, 210.18 for Jeg Coughlin. In the Pro Stock Motor cycle race, Eddie Krawiec emerged as the winner. This was his record breaking performance with a blistering 6.811, which is the quickest pass so far and he made national record with 6.84 in the qualifying round. In the final round he surpassed Hector Arana, with 6.811, 196.90, while the latter received a foul. In the Top Fuel race, the NHRA results showed that Arton Brown made his 25th victory of his career. He surpassed Shawn Langdon with 3.840, 311.99, while the latter trailed with 4.185, 306.46.

Over all the event was quite good and the NHRA Results were quite exciting. Although most of the final rounds were predictable, sources say that Eddie Krawiec record breaking performance came quite as an overwhelming surprise.

POMONA (GaeaTimes.com)- The Automobile Club of Southern California NHRA Finals, which have too...

8 killed when truck in Calif. off-road race rolls into fans who lined up close to race course

28-year-old California man was driver in desert crash that killed 8; no charges planned