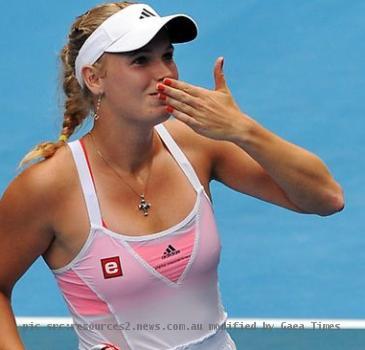 MELBOURNE, AUSTRALIA (GaeaTimes.com)- Despite losing the first set at the quarter-finals of the Australian Open, Caroline Wozniacki made her way back into the game at Melbourne’s Rod Laver Arena on Tuesday. The Danish tennis star registered a well-deserved place for herself at the semi-finals of the tournament by beating Italy’s Francesca Schiavone 3-6 6-3 6-3. Although the Italian tennis ace commenced her clash against her Danish opponent quite convincingly, quickly reserving the first set in just 45 minutes, she failed to continue her form with Caroline Wozniacki almost wiping her out as the game gradually reached conclusion.

Caroline Wozniacki soon got back her gear and dominated the next five games to earn the second set as the Italian struggled to get back on her feet to continue her upper-hand in the showdown. However, the 30-year-old Italian tennis star did not give up that easily and went on to save three match points and broke back to trail 5-3. Nevertheless, within two hours and 24 minutes, the 20-year-old world number one made it clear that she has reserved a slot for herself in the semi-finals of the tournament where she would be clashing against Chinese tennis star Li Na to win the much-coveted title.

While reacting to her victory later, Caroline Wozniacki told reporters gathered at the venue that she intended to play ‘one ball at a time.’ The Danish player also noted that although initially in the game she did not have much chance as Francesca Schiavone was playing well at vital points, later she tried to step into the court more and dominate the points to ensure her win.

LONDON - A British shop, which sells toys for kids, has been put down for removing a pig from a to...

LONDON - Two Iraqi men, who fled to their home country after killing their cousin in 2006 for fallin...

Excitement on bookshelf with arms, new writers and history (IANS Books This Week)

NEW DELHI - Spend the weekend with a load of exciting and profound books. 1. Book: "Arming ...

LONDON - This may come as good news to working mothers everywhere: Fathers are less stressed when sh...

LONDON - It's a known fact that a mother's diet affects her baby's health, but new studies are showi...

LOS ANGELES (GaeaTimes.com) -- The season 1 episode 1 of "My Generation" will be premiered on AB...

WASHINGTON - A study has revealed that measuring three biomarkers in a single blood sample might imp...
Copyright© 2011 The Gaea Times