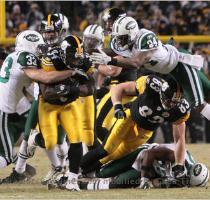 PITTSBURGH (GaeaTimes.com)- Pittsburgh Steelers on Sunday lashed back an appropriate answer to the New York Jets who are known for their tough- talking. The Steelers rendered a tough competition to the Jets before notching the victory at the AFC Championship 2011 by a 24-19. The Steelers had accomplished their task mostly by the end of the first half when they were already taking an upper hand. With the second half of the game of the Jets vs Steelers the Jets could be seen delving into some action which they managed to put up through much difficulty.

After last night’s win the Pittsburgh Steelers will now be advancing for the Super Bowl finals where it will Green Bay Packers vs Pittsburgh Steelers who defeated the Chicago Bears on Sunday itself to claim the NFC Championship. Ardent Steelers fans could not help themselves but cheer aloud for the team that had raged a war against the Jets who were literally struggling to indulge for any action. Rashard Mendenhall did the final injury to the rivals by rushing for a 121 yards on 27 carries. Pittsburgh Steelers coach Mike Tomlin could not hold on to his excitement as he went on to praise the boys who had made him proud by heading to the Super Bowl 2011 final.

The Steelers are now all geared up for the Green Bay Packers vs Pittsburgh Steelers Super Bowl 2011 finale that will be played on February 6. Jets coach Rex Ryan had no idea that apart from Steelers quarterback Ben Roethlisberger any one else would also shoot up against the Jets for the coach himself before the match said that it was real tough to play against some like Ben Roethlisberger not bothering about the other Steelers who were also going to give them a tough fight.

WASHINGTON - A new study has found that adolescents into binge drinking are more likely to engage in...

LONDON - Researchers at the University of Pittsburgh have created a nanoscale light sensor ...

WASHINGTON - People who sleep poorly or don't get enough of it are a higher risk for heart disease a...

Pittsburgh church to offer a 2.30am Mass to confess sins of night before!

LONDON - Looking for a spiritual alternative to the boozy night outs? A church in Pittsburgh has dec...

Press Conference by the President After G20 Meetings in Seoul, Korea