Patriots Vs Jets Match Ends With 45-3 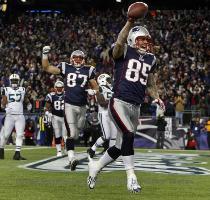 FOXBOROUGH (GaeaTimes.com)- The Jets vs Patriots match recorded the fifth largest margin of victory in the history of the latter, while it also gave them the lead in the AFC East to head them towards the final quarter of the season. The victory of the New England Patriots over the New York Jets with a score of 45-3, was so humiliating for the latter that the coach of the defeated team, Rex Ryan claimed that they got their “Butts Kicked” by the Patriots. They literally had no offense all throughout the match, and the bit that they had, was too unsynchronized. On the other hand the offense on the part of the New York Patriots was too good for the Jets to combat, in the form of a respectable defense.

Both the teams were regarded as equals, with the same standing at 9-2. However, in the Jets Vs Patriots match, the latter made 405 yards over the Jet’s submissive defense. Jets right tackle Damien Woody said that he has seen a lot of crazy things in his career, but this was something that he never expected to happen. New England proved their worth by pulling up the score right at 17-0, while only one minute was left for the first quarter. On the other hand, all that New York could do was limited till the half time, when the score was at 24-3. Since then, their score remained static, while it was raining heavy scores for the Patriots till the last quarter. Patriots quarterback Tom Brady said that it was perfect out there in the field. Although they need to improve a lot on their offense synchronization and on-field communication, it was a fun night for them.

Tom Brady was one man to watch in the Jets Vs Patriots match, as his passer rating was 148.9, by connecting to eight different receivers. He finished 21 of his 29 attempts for 326 yards and four touchdowns with no interceptions. Danny Woodhead caught four passes for 104 yards. BenJarvus Green-Ellis made two touchdowns and ran for 72 yards, to contribute to the Patriots’ victory.

LISBON - NATO leaders have decided that the alliance should set up a system to shoot down ballistic ...

NEW DELHI - The Prime Minister, Dr Manmohan Singh, has condoled the passing away of noted Gandhian ...

MUMBAI - The marriage between Sara Khan and her beau Ali Merchant on "Bigg Boss 4" was nothing but "...