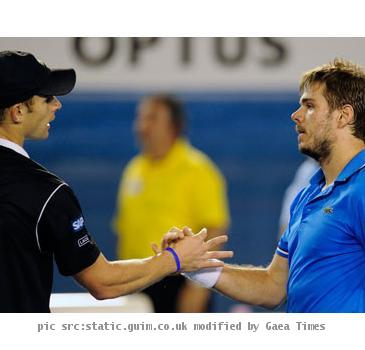 MELBOURNE, AUSTRALIA (GaeaTimes.com)- Swish tennis ace Stanislas Wawrinka registered his position at the quarter-finals of the Australian Open men’s singles after beating Andy Roddick 6-3 6-4 6-4 to emerge triumphant. With Andy Roddick out of the grand slam tournament, the hopes of Americans fans to witness a player from their homeland taste victory at the Australian Open were dashed to the ground. Following his stunning victory at Sunday’s game at Melbourne’s Rod Laver Arena, Stanislas Wawrinka would now be facing fellow Swiss and close friend Roger Federer in the much-anticipated quarter-finals of the championship. The win against Andy Roddick must have been all the more special for the 19th ranked player as this is the very first time that Stanislas Wawrinka has reached the eight round of the tournament.

It took Stanislas Wawrinka two hours and 22 minutes to defeat his opponent in a spectacular fashion as he went on to deliver a scintillating performance to the utter delight of all his supporters. In the very first set, Stanislas Wawrinka made it very clear that registering victory would not be a very easy task for his American opponent, as a drilled backhand pass enabled him to score 5-3. Throughout the game, the Swiss tennis ace delivered some stellar shots which dominated Andy Roddick to a large extent, later making its almost impossible for the American to take an upper-hand in the game.

Meanwhile, with Sunday’s win, Stanislas Wawrinka created a history of sorts as for the very first time, two Swish players would be clashing against each other in the quarter-finals of a major tennis tournament.

LONDON - Do you have bad memory for faces? Well, your superior reading skills may be to blame, accor...

Federer rallies past Wawrinka and into Stockholm semi-finals

STOCKHOLM - Roger Federer turned the tide in spectacular fashion Friday to recover for a 2-6, 6-3, 6...

STOCKHOLM - Roger Federer glided through the 900th match of his career, starting his first...

LONDON - Having seen his dream of a Grand Slam title vanish yet again after his early exit at ...
Copyright© 2011 The Gaea Times