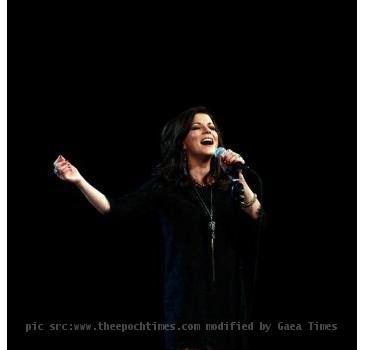 PITTSBURGH, (GaeaTimes.com)- Martina McBride pumped up the spirit of the AFC finals, between the Pittsburgh Steelers and the New York Jets, as she inaugurated the much awaited football event with her melodious voice. She made a sizzling performance that captivated thousands of sports lovers, who were present at the Heinz Field, and all those millions of viewers across the nation, who were glued to the television to watch the match live on CBS.

Martina McBride gave a stellar performance as she sung the National Anthem of United states. However, this is not the first time that she opened a match for Pittsburgh. She said that two years ago, she sang the National Anthem at Pittsburgh, for the playoff game. Surprisingly, just like yesterday, even that match was bagged by the Steelers. That is the reason why the Steelers have started calling her their “Good Luck Charm”. Steelers Marketing Manager, John Wodarek said that Martina McBride presence have yielded a score of 2-0 for the team. He hopes that her magic always keeps the team undefeated. Indeed, after the match, anyone would like to believe that Martina McBride, singing the National Anthem, is bound to get good luck for the team.

Martina McBride said that singing the National Anthem is always an honor, but this performance was all more overwhelming because it was amidst thousands of football fans and their excitement, that boosted her spirit while performing. Later on she tweeted that it was one of the coldest games in the Steelers’ history and after the performance she could feel her fingers and toes again. Martina McBride is known as the “Celine Dion of country music”, and has been the winner of CMA, ACM and Grammy awards several times.

NEW DELHI - Leander Paes and Sania Mirza are happy to team up after four years. The two were welcome...

University of Texas shooter described as intelligent, courteous, but not one to show emotions

Genetically altered salmon is only the beginning; more engineered animals, food are to come