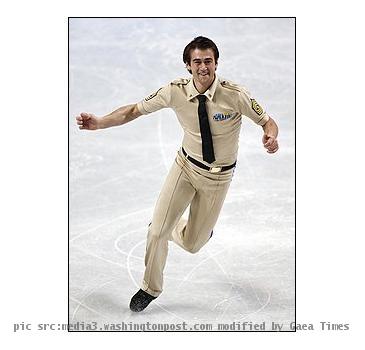 GREENSBORO (GaeaTimes.com)- It was the second day of the most esteemed skating event in the nation, US Figure Skating Championships 2011, and it was marked with the two most exciting events, Ice Dance: Short Dance and Men Short Program at the Greensboro Coliseum.

The Short Dance event was won by Meryl Davis and Charlie White. Meryl Davis looked stunning in her peach dress while her partner, Charlie White wore a very simple white shirt with a black jacket. Even if their dress was not elaborate enough, their graceful performance compensated for it, as they performed their waltz with the songs “La Boheme” and “La Traviata”. They emerged as winner with a score of 76.04. Charlie White said that right now their main aim is to bag the world gold metal, and they have all the potential to improvise for the better. Similarly, Ryan Bradley won the Men Short Program in the US Figure Skating Championships 2011. He wore an army uniform of a higher rank, as he wanted the other people to respect him. His purpose was definitely served, but that was not because of the uniform, but because of his performance with “Boogie Woogie Bugle Boy” that bagged him the highest score of 80.39, to surpass Jeremy Abbott. His comeback was a huge bang, as he was almost thinking about retirement from skating.

US Figure Skating Championships 2011 still has two more days and five more events to go, to continue till January 30. Saturday will witness the events like Pairs: Free Skating, Ice Dance: Free Dance and Ladies: Free Skating. While the concluding day will groove with events like Men: Free Skating and the most awaited of all, Skating Spectacular.

MUMBAI - From suggestions to ban such TV shows completely to wondering how much of adult content can...
Copyright© 2011 The Gaea Times