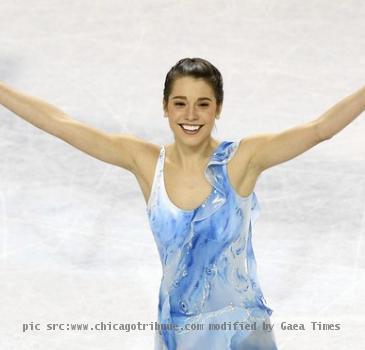 GREENSBORO (GaeaTimes.com)- After disappointing all her fans with a dismal performance during the 2010 US Figure Skating Championships, Alissa Czisny was back in her best form on Saturday, delivering a performance that left the spectators gathered at the Greensboro Coliseum absolutely enthralled. The 23-year-old figure skater showcased a mesmerizing performance at the US Figure Skating Championships held yesterday, which enabled her to win the US Figure Skating women’s title. While finishing the long programme with 128.74 points, the American skater left runner-up Rachael Flatt behind by 7.86 points to emerge triumphant. Rachael Flatt, who won the championship last year, was attempting to attain the recognition of the second women after Michelle Kwan to defend the title, but failed to do with a number of glitches marring her performance.

Lady luck was surely smiling at Alissa Czisny as the noted figure skater delivered a near flawless performance during the competition on Saturday, impressing the judges and the spectators alike. A performance which comprised of an elegant six-triple jump, enabled her to attain her second national title in just about three years. Although the 23-year-old was quite nervous before she commenced her performance, when finally she went on the ice, things went on smoothly for her and the amazingly poised performance earned her many accolades from the crowds, who cheered boisterously throughout her feat.

Following her stellar performance, Alissa Czisny told journalists that it was indeed pretty exciting to make a comeback after considering quitting the sports but ending up finding a renewed love for skating. The figure skater noted that she was heartbroken after her dismal performance in the past seasons and added that winning the title this time was indeed awesome.

For some college freshmen, essays on summer reading assignments pay off with prizes, tuition

US defeats Dominican Republic 10-1CARACAS, Venezuela — The United States defeated the Dominican Re...

US beats New Zealand, Venezuela improves to 3-0 at softball worlds

US improves to 3-0 at softball worldsCARACAS, Venezuela — The United States improved to 3-0 in the...

CALIFORNIA (GaeaTimes.com)- Every time one witnesses a Hollywood wedding, one can very well place ...
Copyright© 2011 The Gaea Times