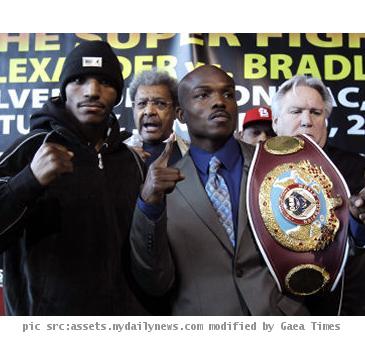 PONTIAC (GaeaTimes.com)- All the ardent followers of WBO junior welterweight champion Timothy Bradley were left extremely disappointed when the much-acclaimed boxer’s bout with fellow American Devon Alexander was halted in the tenth round following an intentional head butt. However, when the three-member judges panel announced Timothy Bradley as the winner of the much-anticipated fight, the boxing champion’s fans could not have asked for more. Although the hype surrounding the fight creating quite a buzz considering the fact that it showcased a showdown between a pair of unbeaten champion, the bout ended in a rather anticlimactic manner last night when at the tenth round Devon Alexander could not even open his eyes, forcing the officials to stop the clash.

After the fight was halted in the tenth round, Timothy Bradley was declared as the winner of unanimous technical decision with the scoreboard 97-93, 96-95, 98-93, all in the American’s favor. Following the bout, Devon Alexander was left injured with a wound on his right eye-lid as well as cuts near both his eyes with his opponent resorting to head butting to get his way through, finally resulting in the end of the fight at 1:59 of the 10th round.

The thousands of fans who had gathered at the Pontiac Silverdome on Saturday to witness the highly-awaited showdown between the two unbeaten boxers were dismayed when the bout was stopped in the tenth round. Another factor that accentuated their disappointment was the fact that the fight between Timothy Bradley and Devon Alexander never really went in full gear or burst with life as many had hoped it would.

LONDON - A BBC radio presenter was forced to apologise after a 'distasteful' gaffe about the Chinese...

LONDON - A bunch of children in a British village sent a potato dressed as Santa Claus into outer sp...

MJ's ex bodyguard to have paternity test for Blanket

LONDON - Late King of Pop Michael Jackson's former bodyguard, who claims he may be the dad of the si...

LONDON - Triple amputee Mark Ormrod says he has 'achieved the impossible' - by completing a 3,530-mi...

Brit housewife is UFO magnet after 17 encounters with aliens

LONDON - A British housewife has become known as a UFO magnet after she claimed that she has been ...

The paper plane that flew to the edge of space and came back with snaps!

LONDON - A British team designed paper plane has successfully flown to the edge of space before ...

LONDON - Who needs a multi-billion-dollar spacecraft to study the earth when you can use a paper pla...

Steven Spielberg says he has fallen for England's natural beauty

LONDON - Director Steven Spielberg has talked about how the beauty of Dartmoor in England mesmerize...

LONDON - A privately-owned bomb shelter in Britain capable of withstanding a blast 80 times that of ...
Copyright© 2011 The Gaea Times