Mark Sanchez Had Sex With A 17 Year Old Girl? 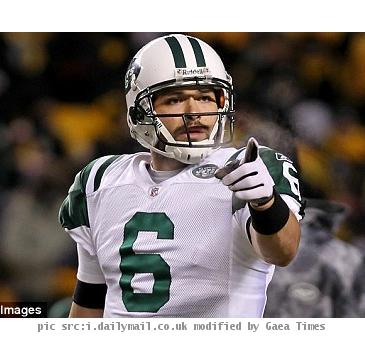 NEW YORK (GaeaTimes.com)- Mark Sanchez, the quarterback of New York Jets has been accused of having sex with a 17 year old girl. The girl, who kept her name under wraps and is known as “E. K” said that the quarterback was engaged in a sexual relationship with her after he met her in a nightclub. The girl even took the photographs of his apartment as a proof of her claim. On the other hand, New York Jets’ officials have refused to say anything about the matter. The spokesperson of the team, Bruce Speight told a reputed media outlet that they would not discuss the private life of their quarterback.

The whole story of Mark Sanchez’s involvement with a 17 year old girl is published in a celebrity and lifestyle magazine. The girl, in her interview said that after their sexual encounter, Mark Sanchez refused to have any romantic relationship with her as she is underage. However, the girl, in reply told him that in New York 17 is not an underage. The girl also said that in the nightclub, the duo flirted and then exchanged each other’s numbers. Moreover, she seemed smitten by Mark Sanchez when she said that he is a “genuine person”.

The 17 year old girl, reportedly said that Mark Sanchez provided her and one of her friends tickets for New York Jets’ game. On the other hand, Mark Sanchez’s attorney denied the whole issue and said that the allegations are “false” as his client does not even know the girl. Richard Kendall threatened legal action against the media outlet for making up a false story about his client.

LOS ANGELES (GaeaTimes.com)- Rebecca Budig, the actress who rose to fame in the popular ABC ...
Copyright© 2011 The Gaea Times