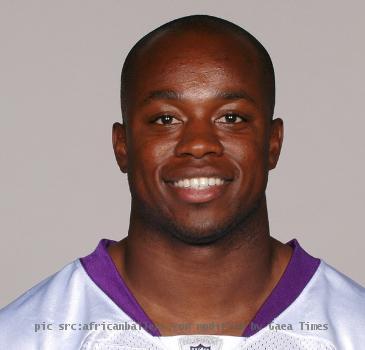 ARLINGTON (GaeaTimes.com)- The National Football team presents Walter Payton Man of the Year award everyone to the players, who have proved their excellence in the games and at the same time spend their time in doing charity. On Sunday, before the Super Bowl game between Pittsburgh Steelers and Green Bay Packers NFL named Madieu Williams as the Walter Payton Man Of The Year. Sadly, the Minnesota Vikings safety was not present at the stadium and he received his award from Persian Gulf, at Fourth Infantry Division.

Madieu Williams accepted the highly esteemed Walter Payton Man of the Year Award via video feed. The video footage shows that the player was surrounded by service members of Iraq. Madieu Williams joined Minnesota Vikings in 2008 and since then he has been involved with North Community YMCA, Havest Prep/Seed Academy and the United Way charities. In the video, which was broadcast at the Cowboys stadium, the viewers watched Madieu Williams saying that the award came as a “tremendous honor” to him. He said that the prestigious award is named after Walter Payton, who was one of the best players of National Football Team.

Madieu Williams said “sorry” to the viewers, as he could not be there at the stadium to accept the award. However, he also added that it is a “greater honor” for him to be with the Iraq with the members of Task Force Iron Horse. The American safety said that he would be watching Super Bowl with the troops. Leslie Frazier, the coach of Minnesota Vikings has also praised Madieu Williams and said that it is a fabulous honor for Madieu Williams to be named as Walter Payton Man of the Year.

LONDON - Residents in the Austrian country town of Amstetten are fuming, as their most infamous fell...

Palin says she can beat Obama in 2012 Prez polls

NEW YORK - It seems troubled actress Lindsay Lohan is eager to start her work on the upcoming biopic...

Rome, Nov 11 (IANS/AKI) The collapse of an important building at Pompeii is a sign of mismanagement,...

A teacher who lost her voice awarded 150,000 pounds

LONDON - A teacher, who lost her voice after regularly shouting in the class in a school in Britain,...

Teacher wins #150k after losing voice trying to make herself heard in class!

LONDON - A British teacher has been awarded 150,000 pounds after she lost her voice trying to make ...

Track II initiative led to US backing India for NSG

NEW DELHI - The US decision to support India for full membership of the top four nuclear clubs, incl...
Copyright© 2011 The Gaea Times