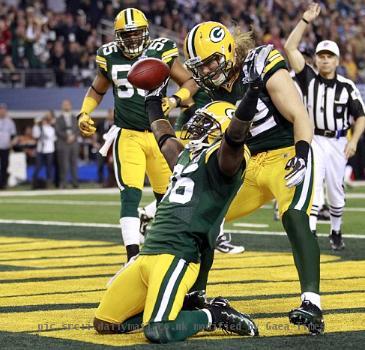 ARLINGTON (GaeaTimes.com)- When Green Bay Packers cornerback Charles Woodson was taken off the field due to a collarbone injury, the hopes of all the ardent followers of the team to win the Super Bowl title received a major setback. The fact that the key cornerback would not be able to face the Pittsburgh Steelers and contribute to Packer’s fight against the AFC champions, left its fans rather dismayed as a victory during Sunday night’s championship seemed a far-fetched dream. However, despite all the odds and other pivotal players such as cornerback Sam Shields and wide receiver Donald Driver getting injured, Green bay Packers not only found their footing but also went on to beat their opponents to register their fourth Super Bowl title.

With Charles Woodson injuring his left collar bone in the second quarter of Sunday night’s Super Bowl showdown against the Pittsburgh Steelers, he was taken to the locker room while the team officials later confirmed that he was not in a position to return to the game. At the halftime, the Green Bay Packers also had to suffer another setback with cornerback Sam Shields injuring his shoulder and safety Nick Collins going to the locker room in a bid to receive intravenous fluids.

If the Green Bay Packers had to confront player injuries which jeopardized its chances of winning Super Bowl XLV, their opponent Pittsburgh Steelers had to face the same problem as the AFC champion also lost some of its players to injuries last night. While Steelers wide receiver Emmanuel Sanders had to bid adieu to the game early due to a foot injury, cornerback Bryant McFadden sustained a hip injury in the first quarter but was able to make a comeback.